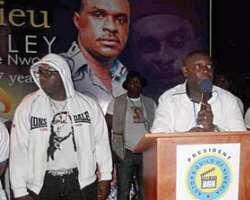 Nollywood stars and fans last Thursday gathered at the popular celebrity hangout, O'jez, Surulere, to celebrate the life and times of one of their own, Ashley Nwosu who died last month in a hospital in Lagos.

The event was a service of songs and candlelight procession. It kicked off at 5 pm, and had who-is-who in Nollywood in attendance. It was a solemn moment as the movie stars clad in white attires took turns to eulogise the virtues of the man that was generally described as “a gentle man in the industry.”

The evening pervaded with solemnity had all the celebrities dressed in white colour attires, particularly, many actors and actresses wore branded AGN's T-shirts with the late actor's picture on it.

The event was put together by the actors' body with support from the management of Ojez. Indeed, it was the largest gathering of Nollywood stars in recent times, in honour of the actor who has contributed immensely to the growth of the industry.

Paying tribute to the departed actor at the event which was officiated by Pastor C. Jackson, Segun Arnize noted that 'we are celebrating the life and times of Ashley Nwosu. He was a good man, and we are going to miss him greatly. ”

Professor Laz Ekwueme said “it is sad that it took the death of a dear colleague of us to come together and unite like this.

Some of us have not seen in ourselves for the past two years.'

The actor turned traditional ruler of Oko community in Anambra State, recounted his personal experience with Ashley from the early days of the industry, describing him as “ a dedicated actor.” Other actors like Justus Esiri described him as “one different actor whose works would outlive him”

It was an evening of celebration of the life and career of the late Ashley Nwosu as many video clips of his works were on shown on big screen, with several big banners of the actor on display.

Overwhelmed by the respect accorded to the late actor, the bereaved family thanked the actor's guild for the support it extended to them since the death of Ashley . The actor's remains was laid to rest yesterday at his hometown in Umuahia, Abia State capital.