'MY NEW ALBUM WILL REFLECT MY PERSONALITY' 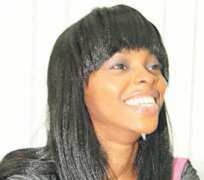 She came into the limelight and entered the history books after emerging the winner of MTN Project Fame Season 3 last year. She had to battle her way to the top prize amidst stiff competition from Eyo, Ochuko and Ghanaian wonder kid, Kesse Frimpong, who many had tipped to win. And for all her hard work in the reality show, Chidinma Ekile smiled home with N2.5 million, a record deal and a brand new Toyota RAV4.

Of course, not one to relent, the petite singer with the strong voice has been burning the mid-night candle at the studio, working with some of Nigeria's most talented songwriters and producers on her album. Already, Chidinma has released a single, Jankolikoko featuring ace musician Sound Sultan. Within a short space of its release, the song has been getting increasing airplay from radio stations nationwide.

'I am happy about the positive response towards my new single. Project Fame really taught me how to be a total artiste and it was what I have learnt that I am putting back in my song. Jankolikoko is just the tip of the iceberg. I am improving my craft everyday,' Chidinma volunteers.

She says further: 'Right now, I am in the studio with really talented artistes, songwriters and producers. I am putting a whole lot of energy into my first album because the expectations are high. I am not scared but challenged to produce an album that will reflect who I am artistically, as well as make an impact in the music industry.'

Good talk. If the success of past winners of Project Fame is anything to go by, there is nothing stopping Chidinma from emerging the next big pop star in Nigeria. The Mbaitoli, Imo State-born singer grew up in Ketu, Lagos under strict and disciplinarian parents. She attended Caleb International Primary/Secondary School, and also Science Foundation Schools, all in Lagos. At the age of six, she started singing in her church's children choir, under the guidance of her mother.

Chidinma discovered Project Fame in 2009. A year later, she registered to be part of the show and auditioned at Ultima Studios in Ikeja, Lagos. She was chosen among the lucky 24 to be in the Fame Academy. Under the tutelage of seasoned professionals, Chidinma grew from strength to strength. At first, she was shy but after months of vocal training and positive reinforcement from the instructors, she grew into her own and easily became the fans' favourite.

Chidinma has promised that her yet-to-be-titled album will be available in all major outlets and stores nationwide, as well as on the Internet.