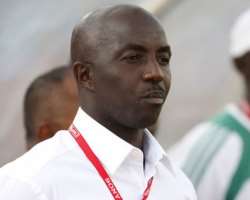 Super Eagles' Coach, Samson Siasia is gunning for a 3-0 win away to Madagascar in September to get the Eagles' 2012 Nations Cup campaign back on track. Nigeria is three points behind Group B leader, Guinea, with only the group winner assured of an automatic ticket to next year's Africa Cup of Nations in Gabon and Equatorial Guinea.

'We can still make it. If we score three unreplied goals away to Madagascar, which is quite possible, and we beat Guinea at least 2-0 at home since they beat us 1-0 when we last visited them, then we will be home and dry.

'I have been told they will use the head-to-head rule in deciding the winner of the group,' Siasia said. 'It is not over now until the last game, even though the Guineans won 4-1 in their match at the weekend.

'If we had lost, it could have been over by now. All we have to do now is to watch our video recordings and make corrections.

'We didn't play well against Ethiopia and so we shouldn't give any excuses. We didn't play like we ought to have played, although there were the problems of fatigue, high altitude and other minor things.

'The truth is that we didn't attack the way we should have done and that element of urgency and determination to win the game were not in our game.

'We wouldn't want this kind of thing to happen again. So we need to win our remaining two matches away to Madagascar and at home in Abuja to Guinea.'

Siasia continued: 'This time, we are going to Madagascar with players who are very positive-minded, who would go out there and do their best for the nation. I guess we played better against Argentina because the stake was high.

'Our bane was coming to play with Ethiopia with a relaxed kind of attitude which actually killed us.

'I think we have learnt a bitter lesson and we just have to forge ahead and make good plans to win the remaining two matches.

'I know that we need to score as many goals as possible against Madagascar and Guinea to have a chance. I can also take solace in the fact that I have a side that can score goals. We have been scoring three, four goals in our recent games.

'We just have to carry that same attitude into the remaining two matches and also defend properly to get there.'