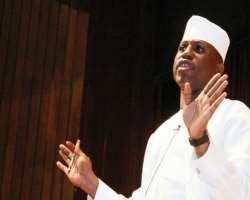 The 16-count-charge was filed by EFCC counsel, Mr. Festus Keyamo, who listed some of the items with inflated purchase invoices as One Land Rover Range Rover, Mercedes Benz sedan, computer units, flat screen LCDs, scanners and other accessories.

Surprisingly, there was no mention of the celebrated N10 billion naira House loan allegedly obtained discreetly without due process and neither was there a mention of another $1 billion (one billion US dollars) fraud as reported by a section of the media.

After interrogating and holding Bankole in its cell for two days, the charges against him were in the amount of N894 million naira.

Some of the charges on the sheet with no: FHC/ABJ/CR/47/11, states as follows “That you, Dimeji Bankole and others now at large on or about the 28th of May, within the jurisdiction of the Federal High Court, being Body of Principal officers of the House of Representatives responsible for the approval of contracts in the House of Representatives, with intent to defraud, did conspire amongst yourselves to inflate the cost of 400 units of 40-inch Samsung (LNS.3410 Television sets by approval the purchase of the said item at the rate of N525, 000.00 per unit, instead of the prevailing market price of N295, 000.00 and thereby committed an offense contrary to Section 58 (4) (a) of the public Procurement Act No. 14 of 2007 and punishable under Section 58 (5) of the same Act.

“That you, Dimeji Bankole and others now at large, on or about the 28th of May, 2008 within the jurisdiction of the Federal High Court being body of Principal officers of the House of Representatives responsible for the approval of contracts in the House of Representatives , with intent to defraud, rigged the bid for the purchase of 100 units of Sharp Digital Copier 5316 by refusal to follow all the procedures prescribed for public procurements in Sections 17 to 56 of the Public Procurement Act N0.14 of 2007, leading to a loss of value to the national treasury and thereby committed an offence…”

Bankole is however still in detention at the EFCC facility.

A statement by one of Bankole’ aides accused the EFCC on embarking on a political-witch hunt and vendetta against the former number 3 man in the country.

Bakare also accused the commission of denying the family and lawyers of the detained politician access to him.

“This is against his fundamental and constitutional rights to have access to his lawyers and close family members while in custody of the anti- graft agency.

“Information at our disposal indicates that pressure was mounted on him throughout Sunday night to get him to write a statement implicating some members of the House of Representatives,” Bakare’s statement added.

Bankole Congratulates New Speaker
Following his detention by the EFCC, Bankole issued a statement congratulating the newly elected Speaker of the House Hon. Aminu Waziri Tambuwal in the keenly contested but transparent election.

The former Speaker who could not be part of the handing over ceremonies as he was being detained by EFCC following his abduction on Sunday night said Tambuwal election reflects the wishes of the members of House and by extension the people of Nigeria adding that the parliament as the bastion of democracy must elect its leadership democratically.

In a statement signed by his special adviser on communication, Chief Kayode Odunaro, the former Speaker urged his successor to cooperate with the Executive arm of government in the interest of Nigerians.

Bankole advised the new leadership to maintain its independence and build on the successes of the Sixth Session of the National Assembly in such areas as constitution amendment and electoral reforms.