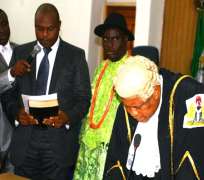 But less than twenty minutes into the inauguration ceremony, Delta State Governor Emmanuel Uduaghan arrived the chamber of the House and half way into the ceremony, he (Uduaghan) walked out unceremoniously while the Clerk of the House, Mr. Raymond Yavbieri, was still presiding.

THEWILL gathered that Uduaghan was not comfortable with the way the Clerk of the House was conducting the ceremony especially when he (Uduaghan) had sent word across to the Clerk to skip some items on the Motion Paper, as he had other functions to attend, but the Clark went ahead and started reading out all the names of the members-elect with their political parties.

The election of Ochei, 42, as the new Speaker followed the nomination by the member-elect representing Ika North East State constituency and immediate past Speaker, Hon. Sam Obi, and was seconded by member representing Ukpe Constituency, Hon. Julius Okpokpo.

The Speaker and the Deputy were unanimously unopposed in the election. Hon. Ganagana, representing Patani consistency is the only forth term member of the State House of Assembly having been first elected in 1999.

In his acceptance speech, Ochei, a Chemical Engineer with an MBA said, “I am only the first among equals, I therefore crave your support, corporation and love, as a team with the collective desire and objective of bringing about development and sustainable growth, through the instrumentality of legislation, once again.

“I congratulate all members of this fifth assembly, and employ all of us to join hands and work together. I must emphasize that the elections are over, and it’s time for our legislative work. What is important is that we are all Deltans with collective desire, aspirations, goals and working together, we shall build the Delta State of our dreams,” Ochei said.

He further stated that, “As you are all aware, the legislature is an arm of government with among other functions, the task of law making, representing the citizens, over sighting the activities and performance of government. It is imperative to state that the principal purpose of each arm of government is to provide service to satisfy the needs of the people. Each arm of government has its functions, vision, mission and the realization of this vision is essence why we were elected.

“In this fifth assembly, I am desirous to provide the needed efficient, effective and purposeful leadership in collaboration with other arms of government to positively impact on the lives of Deltans. To this end, God helping me, I will vigorously strive to foster a cordial working relationship with the executive and the judiciary without compromising the independence of the legislature.

“You have unanimously elected me as the Speaker of Delta State House of Assembly; I thank you for entrusting upon me the leadership of the House and finding me worthy to occupy this exalted position of Speaker. Be rest assured that I will not betray this trust,” the new Speaker pledged.