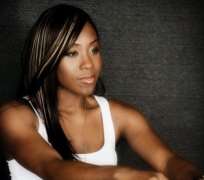 He started off as the popular and handsome face that thrilled viewers of entertainment station, Soundcity before he left to pursue his dreams, which he feels is bigger than been in Soundcity. He is Deji Falope and his profile seems to be soaring since he chose to walk on his own path and one of the results is Dance competitive show, Malta Guinness Street Dance, which has been his most recent claim to fame.

In a recent time now, Deji has been in a working relationship with Singer May7, the daughter of Former Football Star, Olusegun Odegbami. They have done many projects together and close to each others.

Deji who played a leading role at May7 Thanksgiving and birthday party at prestigious Club 10 just of recent, declared himself that he's in love with the singer, May7.

In a statement 'I would say my relationship with May7 is just a working relationship, but now my feeling for her has glow high every days in our working period, because May7 is a wonderful woman, and I am excited to be working with her. We have done quite a lot of projects together, and I found out that she is a perfectionist, just like myself. We just finished a project of launching her new single, “Number” in London and Nigeria, and it was a huge success.