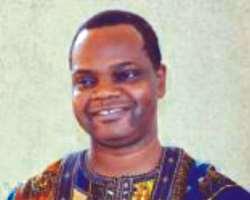 THE MANY LIES OF PASTOR GBENGA OSO OF LAUGHTER FOUNDATION

Unknown to many, Pastor Gbenga Osho, the presiding pastor of the Laughter Foundation Church International is not what he claimed he is if feelers reaching us are anything to go by. It was gathered that the pastor left the Gospel Faith Mission International (GOFAMINT) years back in controversial circumstances to form his own baby factory church.

Recently, some people squealed to nollywoodgists.com that the pastor popularly known as “Baba one Million Babies” is deceiving people into believing the television commercials where he always displays nursing mothers as those who are blessed with the fruit of the wombs in his church.

Those who are in the know however claim that the miracles are nothing but fictitious and a case of the more you look the less you see; an avenue to exploit women who are in dire need to have children of their own.

The story is that those who give testimonies that they have received answer to their search for the fruit of the womb are nothing but blatant liars; as it is alleged that they are paid N10,000 by the ambitious pastor before they can come out to parade themselves and dance in front of television cameras to lure unsuspecting women to the church.

Aside this, another scheme of the General Overseer of the Laughter Foundation, according to insiders, is to always persuade those close to them to come and do thanksgiving and dedication of their new babies in his church. But unknown to them, he just wants to use them for his own selfish motive; the babies always end up on television screens as miracle babies that God produced in his church.

Another sore point in his ministry is the way and manner those who served as his assistant pastors and aides are always shown the way out of the ministry having contributed their quotas to the development of the church. This, we gathered, is a frequent occurrence to those who are familiar with the church.

It was alleged that the pastor always sacks those who started the church with him to cover his tracks very well so as to prevent them from knowing too much of his secrets. Some of the pastors that are said to have been sacked by the GO because they had known too much are Pastors Olo Taiwo, Peter and Foluso, who are pastors that followed him from GOFAMINT among others.
Apart from his lies, if the pastor turns to a boxer, he will be a match for any of the Klitchko brothers if he encounters them in the boxing ring. Recently he was said to have battered his wife Esther and turned her into punching bags. The ugly incident occurred on 28th of April, days after the Easter celebration, which he mistook for Boxing Day

Those who witnessed the one-sided fight claimed the Pastor, who lives in highbrow Magodo Estate, put his supposed call-to-serve aside to show his wife that Nigerian boxer Samuel Peter has so much to learn from him.

He was said to have locked all doors leading to the house so that nobody would disturb his caged boxing bout with his wife as he pounced on the woman and beat her mercilessly, denying neighbours the chance to rescue her from him.

The show of shame of this fighting pastor continued for more than 2 hours before the men of the Alausa command of the Police Force came to the rescue of the Pastor Mrs when her younger brother called them to the rescue. Pastor Oso was later invited to the police station where the DCO asked him to settle his home as such act was unbecoming of his status in the society. The pastor pleaded with the policemen not to let the story get out of the station, forgetting that his neighbours were also aware of the whole incident. There is a saying that attitude is like smoke; no matter how hard you try to cover it, it gets to show itself. Oso's conduct has finally shown that there is indeed a devil in this man of God.