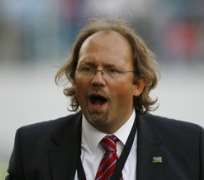 Ethiopia has appointed Zimbabweand Namibia's former manager, Tom Saintfiet, as coach in place of a Briton, Iffy Onuora, ahead of the clash with Nigeria.

The 38-year-old Belgian, whose contract details were not disclosed by the Ethiopian Football Federation on yestersday, will take charge of the Horn of Africa nation when she meets Nigeria at home next month in an African Cup of Nations qualifier. His predecessor, Onuora, was sacked just 10 months into his two-year contract.

Officials said the federation had taken into consideration Onuora's send-off against Madagascar in October, which led to his being banned for a game in Nigeria in March, and unflattering comments attributed to him by British tabloid newspapers.

Ethiopia, nicknamed the Walya Antelopes, are third in Nations Cup Group B, three points behind Nigeria and four behind surprise leaders Guinea.