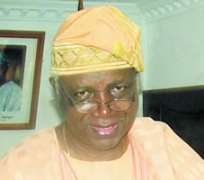 The crisis rocking the Ondo State Chapter of the Peoples Democratic Party (PDP) yesterday deepened as some aggrieved members of the party announced the suspension of the  former Governor of the state, Dr. Olusegun Agagu.

The suspension of the former governor is coming barely 24hours after some thugs sacked the party secretariat located along Oyemekun Road, Akure to protest the 10-man list sent to the national headquarters for political appointments.

The aggrieved members who addressed a news conference at the Adegbemile Press Centre were mainly people who benefited enormously from the former governor while in office.

Some of the personalities served as commissioners, members of boards, special assistants and special advisers in the Agagu-led government from 2003-2009

The party was engulfed in serious crisis shortly after the general elections in which it performed poorly.

Addressing reporters on behalf of the aggrieved PDP members, Mr. Segun Adegoke, said the former governor was suspended for leading the party to inexplicable and inexcusable electoral failure.

They also accused the former governor of accentuating the unending crisis in the party which has brought PDP in Ondo State to its comatose state.

Besides,  Adegoke also announced the dissolution of the state executive over financial impropriety.

He explained that a panel would be set up to investigate the finances of the party since February, 2009 till date.

Also to be investigated, according to Adegoke, is the N33 million contributed by  party members for the building of the state secretariat and the     N10 million donated by former vice president Atiku Abubakar.

He said, 'The leaders and the stakeholders resolved that Dr. Olusegun Agagu should account for  the enormous amount of money contributed by members of the party as welfare fund which he solely administered.

'Agagu has become the albatross of the party, hence the stakeholders resolved that he should be suspended from the PDP in Ondo State.'

The group therefore set up a nine-man interim management committee to oversee the affairs of the party, pending the time the crisis rocking the party will be resolved.

The committee, according to Adegoke was set up after wide consultation with various leaders and stakeholders of the party in all the 18 local government areas of the state.

Also, the group also rejected the ten-man list sent to the National headquarters of the party for consideration for federal appointments.

His words, 'the leaders and stakeholders totally reject the list of ten names compiled by Dr. Agagu and Dr. Tayo Dairo in a hotel room in Lagos'

In a swift reaction, the former Deputy Governor of the state, Otunba Omolade Oluwateru, said the action of the group was uncalled for.

He wondered why the group rejected the ten-man list when many of their members were are at the meeting where the nominations were made.

Also reacting, the state chairman of the party, Dr. Tayo Dairo described their action as illegal and child's play.

He said they are justifying the money given to them by the Defence Minister to ensure that party is destabilized.

His words, 'Who are these people that are talking, are the members of the executive at the ward, local government and state level. Who are they? If they have the party's constitution, they will know their limitation.

'These are old men who are struggling to be relevant and we only sympathize with their anxiety. We will not wield the big stick against them.

'So, their action is null and void, they are just seeking relevance, these are people who are trying to justify the money giving to them by Tokunbo Kayode'