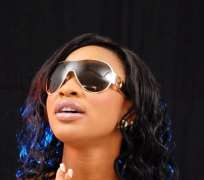 Tonto recently won hottest face in nollywood award and as a gift for winning her boyfriend suprised her with a set of swaroski diamonds,its a set and has the choker,the arm band and the earrings.

The boyfriend is based in Nigeria but Tonto is hiding him even from her close friends and the media as she has blamed both for the collapse of all her relationships in the past.she wants to marry him and is really hiding his identity,she is showing all her friends the diamonds but is not saying who gave it,

She just tells them its her boyfriend and that they hope to marry.shes uses the excuse that he is too shy and doesnt like attention from anyone else but her....well what do you know!

The drunken in love actress has taken her diamonds to the bank for safe keeping!