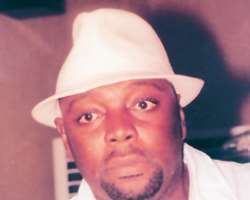 Segun Arinze is one of the well-known actors in the country who has made a lot of people happy with his acting skills. But today, Arinze is not a happy man because an unidentified person is impersonating him.

Arinze told Life and Beat, last week, that somebody hacked his yahoo mail address and has assumed his identity. The fraudster is extorting money from people with his (Segun's) name.

According to him, he stopped using the email address; [email protected] some months ago, when he found out he could not access his mail.

“I tried to retrieve it from yahoo administrator but I couldn't. It wasn't until somebody called me recently and told me she was chatting with me on-line that I realised somebody was actually using my email address.”

“Then again, one girl called me from Abuja and asked me the room number of the Agura Hotel, saying that I told her to come and see me while we were chatting online. I quickly told her I was not the one and that she should leave that place immediately.”

Arinze said he got a new mail address and recently, he 'saw' the 'impostor' online and he started chatting with him.

“I told him I was Segun Arinze and I asked him why he was using my yahoo ID. He started telling me all sorts of rubbish and that he was using my name to make money from people.”