Faces of the Next Movie Stars 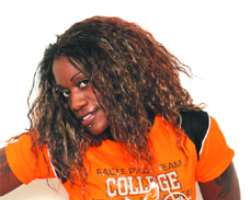 After a first of its kind white party organized to herald the Next Movie Star reality TV series in Sierra Leone last month, the show has finally come home to roost with 16 contestants storming the house penultimate Tuesday.

Produced by Sola Fajobi led Digital Interactive Media (DIM), this year's edition of the show is bigger, wider and better in terms of spread across the African continent.

In the house are contestants from Nigeria, Ghana, Sierra Leone, Liberia and Gambia. According to Fajobi, the vision of DIM is to take the world by storm by discovering and nurturing more talents in the movie industry and place them on the pedestal of stardom.

“Our dream is to use Next Movie Star as a strategic public relations tool to project Africa's image positively to the world, that is the reason NMS 2008 has taken a leap from that of last year which had Ghana as a major player,” he said.

But then Fajobi is not limiting the scope of the show to just five countries, as there are plans to do the Next Movie Star Africa in the nearest future.

The winner of NMS will go home with a brand new car, movie contracts, a flat for one year, $5,000 cash prize, all expenses paid trip to a European country and attendance of a major film festival in Europe. Other housemates will go home with up to N10 million worth of prizes.

However, those who had the opportunity of attending the white party held at the prestigious Country Lodge in Sierra Leone last month had described it as glamorous in all ramifications and a red carpet event typical of what you see in Hollywood.

The party was hosted by one of Nollywood's finest acts, Desmond Eliot who flew in to conduct the auditions and the red carpet party. Also in attendance were the society bigwigs of Sierra Leone including the Managing Director of GTBank Sierra Leone, Mr Akin George Taylor and Zain Sierra Leone top guns. The guests also included top actors and actresses in Sierra Leone like Famous. “The party, which was sponsored by Zain and supported by GTBank, ABC TV and Country Lodge, was held to launch the Next Movie Star in Sierra Leone, and to promote their entertainment industry to the corporate world.

“The event was part of Next Movie Star Project Africa Plan to position the entertainment industry using the talent hunt reality TV show concept and the popular Nigerian movie industry as a vehicle,” Fajobi explained.