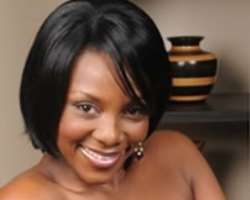 Genevieve
She did not have the so-called 'normal' childhood. Her teenage life was truncated. She became pregnant at 17. Much was not expected from the little girl who did not follow the 'golden rule' of right upbringing (from secondary school, university and to career), however, against all odds, Genevieve Nnaji has broken, recreated and became the rule for many and is now a success story.

On May 3, 2011, the Nollywood star clocked 31. She marked her birthday in far away London, full of smiles and in company of hip pop star D'Banj, friends and fans. Yes, Genny has many reasons to smile. Out of the lot that passed through Nollywood she has risen to become one of the very few iconic movie figures in Africa. Cable News Network (CNN) even dubbed her Julia Roberts of Africa.

In an interview she granted Treasure Magazine, Genevieve shared the story of her life. The Mbaise, Imo State-born actress didn't grow up in the East. She is what you call the typical Lagos girl. Speaking on her childhood, she said: 'I grew up in Lagos basically; my family is here in Lagos. I went to Methodist Girls High School, Yaba, Lagos. My mum is a teacher and my dad is a retired banker. Okay, I'm from a family of 10, eight kids, mummy and daddy. I left school in 97, went to UNILAG to do Creative Arts (part time); it was difficult keeping up because of doing movies, so I decided to drop and continue with the movie until I'm ready.'

That is not all, she grew up with strong Catholic background, a church she claimed impacted conscience into her, and it was that conscience the made her take a stand against abortion when she became pregnant as a teenager. Speaking on her child and pregnancy, she said: 'Yes, I have a child. I was pretty young though. What happened? What I learnt was that no matter how much I try to control myself and be preserved and everything, sh*t still happens to me. So, I think what is meant to be will be.

You can only try to avoid it or prolong it, but it will be. The truth is, if it hadn't happened I won't be here now, because it had a way of shifting my life. So, it is like falling to one side and trying to make the best out of it. I probably would not be here. It happened and the best I did was not to dwell on it. It affected me in a way, but I didn't dwell on it. I just felt it was not about the downfall, but how to pick up yourself that makes you a strong person, and not everybody would understand. And there is this thing I keep telling myself; life is once. So, life starts and ends with you. You live once, try to make the best of it. Don't let people discourage you, people are going to talk, they are going to judge, but truth is, people who talk the most are those who do the worse. If you are not important, people won't talk about you. Be yourself, be happy.'

The pregnancy was seven months gone before Genny's Catholic mum discovered it. Genny said, 'She couldn't believe it, 'how can she be pregnant when she was very careful'.' A test confirmed it, her parents were disappointed but stood their ground against abortion. 'I didn't feel anything. I didn't even know till I was about four months. It was there, but I was still in shock. I didn't believe it. The only time I actually believed it was when I saw it in a scan. Seven months! And I saw it's in there and I said, 'Okay, it's true!' I was like, 'Oh, it's like some disease….' I think I was pretty much hard on myself then than my parents or people. I was harder on myself, really. My parents reacted the way any parent would react - disappointed. I didn't know. My mother discovered it for me. I didn't know anything really. She discovered it for me and it was too late, we couldn't do anything and we're Catholics and I'm glad I didn't do anything funny really.'

Speaking further, she said: 'Getting rid of the pregnancy was an alternative then, but it was too late, because not until I was four months before we discovered it and so it was not what we could do, and my dad was like, 'it's a child for Christ's sake. God knows why he wants to bring that child into life'. We are Catholics and it's just that conscience, you do wrong once and doing another would not make the first right. So, you either correct your mistake by doing the right thing. If I was pregnant, and then have an abortion, it would have been like murder after fornication! So, that was basically wrong.

'I'm sure everywoman knows the feeling of pregnancy, but for the young girl - it is difficult for me to say now, because I have grown much older - but I know at that time it was, let me see… Anyway, I'd just wake up every morning hoping to wake up from a dream… but you know it doesn't happen so. It's more like giving me hope that 'no, it wasn't…' I was like looking forward to sleeping and waking up, then it wasn't getting any better anyway.'

Were her parents at fault? No, Genny took responsibility, 'Mine had nothing to do with it, it was a different case entirely, which I wouldn't want to go into. My parents did their jobs and I did my own job of listening and everything. My parents were fantastic. I got the best of home training. It's none of my parents' fault. I was close to mum and Dad and they told me everything I needed to know, okay. But what happened had to happen, somehow. So, I didn't think it had to do with my parents, although some people could suffer from not getting enough education from their parents, but I think my mum did her part as a mother. Yes, she did.'

On the lesson life taught her, she said: 'Like I said before, I have learnt that life is the way you live it. It is not about theory, no lecturer can tell you what life is. Life is what you make of it. Life is what you want it to be, basically. For somebody like me, if I say I want this now and I work towards it, nothing is going to keep me away from that, I'm going to get it. Even if it means me drawing up my account, I want that, and I'm happy. I always think of today and not tomorrow. It is not like, 'Oh, my children in the future…' whatever I do right now, I believe I'll dig into it. Yes, I will try to be considerate later… but life is too short, you go now and whatever you've achieved other people will enjoy it.

'I think it is doing what you love doing, that's what life is basically all about. Be happy; whatever you do let it be worth doing well. Don't do things because other people expect you to do it. Please yourself, but don't be selfish about it. You know it's not like when you enjoy killing; that's not what I mean. Whatever your direction, if your father wants you to be a doctor and you want to be a musician, follow your dreams! At the end of the day, if you have a gift for it… (go for it).'

All in all, Genny has come of age and done well for herself. She is a role model, not just to teeming aspiring actresses but to those who had a truncated/pause in the journey of their dreams, but are trying to pick up the pieces. And as icing on the cake, the beautiful actress is on the verge of inking a document that would see her pair with a Hollywood star in a multi-million naira movie. Happy birthday to Africa's queen of the tube!