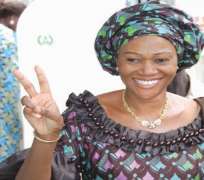 Candidate of the Labour Party in the election, Mr. Dapo Dorusinmi-Etti and his party last week petitioned the election tribunal asking it to re-order fresh elections in Lagos Central Senatorial District and 7 other federal constituencies in the state.

The party detailed its concerns in a 76-page petition, which its counsel, Chief Chukwuma Ekomaru (SAN) filed saying the election is a violation of Section 44 and 83 of the 2010 Electoral Act.

The party described as illegal and unlawful the decision of INEC to exclude its symbol and names of its candidates from the ballots of the April National Assembly elections.

The party has therefore sought a declaration that Durosinmi-Etti and other candidates were validly, duly and timely nominated, but the electoral commission unlawfully excluded them from the list of candidates that contested the in the National Assembly elections in the state contrary to the provision of the 2010 Electoral Act.

The party also provided four different correspondences sent to the electoral body on the status of its candidates to which the INEC did not provide as evidence. It further annexed the nomination form of the candidates to the petition, which it said, served as a proof that its candidates were lawfully and duly nominated.


Armed with the above-mentioned evidence, Labour Party is seeking an order compelling the electoral commission “to perform its duty as required in Section 44 and 83 of the Electoral Act by including its symbol in the ballot so that the electoral can vote for its candidates in a re-ordered election in Lagos Central and other constituencies.”

The party is also seeking an order of “fresh elections in Lagos Central Senatorial District and other federal constituencies so that its symbol can be included in the ballot paper in order to allow all its candidates excluded from the April 9 National Assembly elections participate in the fresh elections in line with the Electoral Act.”