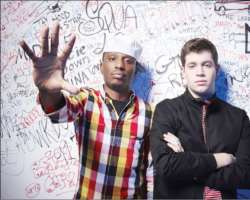 Rapper Chidera 'Chiddy' Anamega from the Hip-Hop duo, Chiddy Bang is the current holder of the 'World's Longest Freestyle Rap' title. The American-based rapper with Nigerian root last weekend had a rap freestyle running for 9 hours, 16 minutes, and 22 seconds at the MTV organised 'O Music Awards' to beat the previous record of 9 hours, 15 minutes and 15 seconds held by the rapper named M-Eighty.

"That's better than a lot of people, if you really think about it; I freestyle once a day for like 30 minutes straight. I never put myself to this maximum test, but it's very exciting for me, and once this all done, it'll be like, 'Wow I didn't know I could go that long.'"

"It's a marathon, not a race," Chiddy continued.

"It's all about pacing yourself. I tend to be very, very hype when I rap. This time, I realise I'm gonna rap for like nine hours, so I'm not gonna come out of the gate hyped. I'm just gonna pace myself and ride that thing out, ride it till the wheels fall off."

The group Chiddy Bang gained recognition after its 2009 released Extended Play set, 'The Opposite of Adults' received critical commendations. Chidera acknowledges his Nigerian roots on the opening of the track 'Sooner Or Later' which receives sampled elements from the legendary Afrobeat singer, Fela Anikulapo-Kuti.