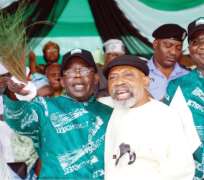 UYO, April 28, (THEWILL) – An upset was recorded in the Governorship/House of Assembly election conducted on April 26, 2011 in Akwa Ibom State as the candidate of the Action Congress of Nigeria (ACN) in the Uyo State Constituency House race, Comrade Fabian Okon Ekpeyong, was declared winner while he was still in prison custody, having been remanded for more than one year for alleged complicity in the murder of his brothers – Emmanuel and Mathias Ekpeyong.

Fabian’s victory is quite significant as he successfully stopped the ruling PDP from clinching all the seats in the state House of Assembly like it did in previous elections. The PDP won 25 of the 26 seats available in the House race.

Uyo is a stronghold of the ACN.
THEWILL gathered that the politician was granted bail and released from prison custody today.