Bomb Kill At Least Two in Nigeria Ahead Of Polls 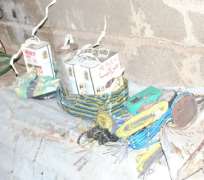 An Islamic sect is suspected of being behind bomb blasts that killed at least two people in northeast Nigeria on Sunday, police said, two days before governorship elections in Africa's most populous nation.

Three bomb blasts ripped through a hotel and a motor park in the remote northeastern city of Maiduguri, where the radical Islamic group Boko Haram has been responsible for hundreds of religiously motivated killings in the past two years.

"Two people were killed while eight were injured by the bomb blast that occurred at Tudu Palace hotel," the police commissioner of Borno State told Reuters on Monday.

"The number of casualties from the Kano motor park bomb blast has not yet been ascertained ... the bombs are suspected to have been planted by Boko Haram members."

Boko Haram, whose name means "Western education is sinful", launched an uprising in 2009 in which hundreds of people were killed and its attacks have become increasingly political.

In January gunmen assassinated Modu Fannami Gubio, the opposition All Nigeria People's Party (ANPP) candidate for governor who was favourite to win in April, and threatened further attacks on the ANPP, which controls the state.

The attack in Borno, a remote state on the border with Cameroon, is not thought to be related to post-election violence in other parts of northern Nigeria which have killed over 500 people since the presidential vote on April 16.