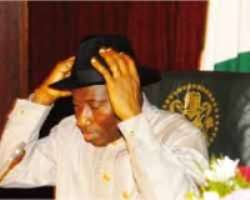 C'Wealth, EU, AU, others laud presidential polls
NOW it is official. With 22,495,187 votes, Dr. Goodluck Ebele Jonathan yesterday officially emerged as the fourth president of the Federal Republic of Nigeria.

The Chairman of the Independent National Electoral Commission (INEC), Prof. Attahiru Jega who announced the result of the presidential polls, said the presidential candidate of the Peoples Democratic Party (PDP), President Goodluck Jonathan, scored 22,495,187 votes out of 39,461,484 valid votes cast.

International observers who monitored last Saturday's presidential election have adjudged the exercise credible. But they identified some shortcomings in the poll for which they listed likely remedies.

They called for vigilance over the electoral process and urged all parties, their supporters and the general populace to accept the results as declared and adhere to the code of conduct prohibiting acts of violence, threats and intimidation and other violations of the Electoral Act.

At separate briefings yesterday in Abuja, the observers made up of the Commonwealth Observer Group, the European Union (EU) Election Observation Mission, the African Union (AU) as well as the National Democratic Institute (NDI) gave generous credit to the Attahiru Jega-led Independent Electoral Commission (INEC), but demanded improvement and adjustments.

And the Amnesty International also yesterday appealed for calm in the seven northern states where violence erupted even before the final polls results were released.

Head of the Commonwealth delegation and former President of Botswana, Festus Mogae, declared the group's position at a press conference in Abuja yesterday, saying that the hitches experienced in the conduct of the election, were negligible. He told Nigerians to accept the results.

'Nigerians should accept the outcome of this election. Though there were  minor  technical or procedural imperfections, they were not related to mischief. I think the election was credible,' he said.

Some of the challenges the group noticed in the eight states where they took part in monitoring, according to Mogae, were low percentage of women candidates, inability of election officials to vote, underage voting in one of the states monitored, missing names on the voters' register, inadequate furniture and lighting for the polling centres and low protection from the elements.

The NDI in its short-term recommendations for instance asked the Nigerian authorities to 'follow through in prosecuting electoral offenders' just as it said all polling places with over 500 voters should be split into sub-units to improve efficiency and access to the process.

Other recommendations made in view of the next elections, owing to the shortcomings already observed include the need to: Standardize implementation of procedures in all states and local government areas; respond to increasing needs for better crowd control in ways that neither  intimidate voters nor compromise the secrecy of their ballots in cooperation with polling staff;  ensure security, sufficient staff and adequate facilities for collation; and submit names of centres, submit names of agents assigned to represent parties at each polling unit; and   refrain from extra-judicial and violent rejection of election results and use peaceful, legal means to resolve electoral disputes.

The NDI's team is led by former Canadian Prime Minister Joe Clark and has former Prime Minister of Niger Mahamane Ousmane, Secretary of the state of Missouri Robin Carnahan as well as Christopher Fomunyoh on board. The EU delegation was led by its chief observer Alojz Peterle. There is also an EU parliamentary delegation led by Mariya Nedelcheva.

According to the NDI's delegation of 30 observers from 14 nations yesterday, 'Nigeria's just-completed presidential and National Assembly elections represent a step forward from seriously flawed elections of the past and hold the promise of setting a new standard for integrity in Nigeria's electoral process.'

And in a similar tone, the chief EU observer Alojz Peterle said in his joint briefing that  'the presidential elections last Saturday mark an important step strengthening democratic elections , however, challenges remain.'

Nedelcheva's prepared statement completed the endorsement. She said : 'Saturday's elections are a convincing proof that the Nigerian authorities, institutions and electorate are determined to remain owners of their destiny and to run even better elections in the future.'

Stressing that 'continued vigilance is still needed through the completion of the 2011 election process to realise the promises of the polls,' the observers' report lauded the 'dedication and neutrality of polling staff…these staff showed initiative and increased confidence in addressing the challenges that arose on election day…accuracy of voters register appears to have improved.

'Most Nigerians met their civic responsibility…the responsibility to combat negative practices such as vote buying, electoral malfeasance, intimidation and violence, rest not only with INEC but all sectors of the Nigerian society.'

By and large, the report of the EU monitors noted: 'If compared with the National Assembly elections, INEC managed to improve the overall organisation of the polling day mainly during accreditation and counting phases. Nevertheless, during voting, inconsistent implementation of procedures and attempts to influence voters were noted. Moreover, the INEC results coming from the states in South-South and South-East show percentages close to 100 per cent .'

Fielding questions on the outbreak of violence in some parts of the country as to whether that is sufficient to affect the adjudgement of the polls, Peterle said: 'We observed the elections in 633 polling units in both rural and urban areas. We call upon the people of Nigeria, the candidates and political parties as well as other stakeholders in the elections to maintain a peaceful and positive atmosphere.  Attention needs to be paid to the political environment both before and after elections. The elections process is still going on and this is only our preliminary findings, and recommendations but we are confident that the Nigerian electoral forces will be able to show   the political maturity desired.'

Asked the same question, the NDI's Clark said: 'Yes, we can say the elections have been generally free and fair, on the basis of what we have seen and within the Nigerian context.'

On post-election violence in parts of the north, and how to compel compliance with the electoral codes, he said: 'INEC should have a back-up staff for presiding officers.'

Quoting the relevant section of the electoral acts on violence, he said: 'We are concerned about the violence. We deplore it. The ethics and code that I referred to. The political parties signed this code and pledged to abide by it when we met with all of them prior to the elections. The political parties and their leaders made commitment to this during our meetings with them. I expect them to honour it.'

The delegates of the International Republican Institute (IRI),  Washington DC, in its preliminary assessment of the election commended the organisation of the polls. It also lauded the overall integrity of the electoral process.

In a statement in Abuja yesterday, the IRI delegate said it visited 340 polling stations spread across the country and was impressed by the Nigerian peoples' desire for democracy coupled with their determination to vote. 'Voters came out early, calmly stood in line for hours to be accredited and then vote in many cases stood by in place to observe the count.'

The IRI delegation commended: 'The professionalism and independence of INEC, specifically the appointment of Chairman Jega and Nigerians' confidence in his leadership and ability to oversee open and transparent elections.'

A more proper role of security forces; and a reduction in election-related violence was also commended by the IRI, which called on INEC to ensure that it records further improvements in some areas.

Civil society was also an active participant in the electoral process and played significant role by conducting voter education and demonstrating their willingness to accept results of the April 9 National Assembly elections.

According to IRI, 'As Nigeria enters the final stage of the electoral process as it prepares for the governorship/state assemblies elections, IRI delegation encourages the political parties and election body as well as local government officials at all levels to respect the will of voters by conducting the tabulation in a transparent and honest manner. The delegation also encourages the candidates and their followers to accept legitimate results and file legitimate complaints with the proper authorities.'

In a statement by Amnesty's Deputy Director for Africa, Tawanda Hondora, also appealed to the military to handle the violent unrest in Kaduna, Kano, Gombe, Adamawa, Bauchi and Plateau states and the Federal Capital Territory (FCT) without excessive force.

Meanwhile, a militant group, Joint Revolutionary Council (JRC), said the unrest in the North should spur the current government to consider the idea of the convocation of a sovereign national conference.

The JRC spokesperson, Cynthia Whyte, said the conference should allow all ethnic nationalities across Nigeria since it has become very clear to all that Nigerians do not belong together.

Whyte, whose group was involved in the series of attacks that almost crippled the Nigerian oil industry before the Federal Government amnesty programme of 2009, has however, appealled to all youths of the Niger Delta to remain calm in the face of what he described as untoward provocation by some elements from the northern region.