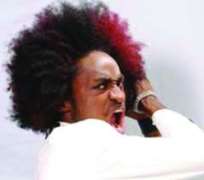 For Denrele Edun, eccentric television producer and presenter on urban music channel, Soundcity, everything that has a beginning must surely have an end.

The romance between Denrele and Soundcity started about four years ago. He started as a presenter with four others, who had left, but he rose through the ranks to become a producer, head of presenters and the ultimate face of Soundcity.

But all these are over, as the presenter whose unique selling point (USP) is his propensity for weird hairdos, dress sense and attire, have called it quit with the media outfit owned by Tajudeen Adepetu.

According to a source, the two parted ways when people close to Adepetu complained that Denrele's face was 'too everywhere' coupled with the fact that many months salary is owed the guy.

Denrele, we learnt, does not want any unnecessary confrontation with his former boss, hence the 'hush-hush' that followed his exit. He is said not to be too happy with the manner in which Tajudeen demanded for his official car. According to him, the way Tajudeen asked for the car was shocking and I felt betrayed.