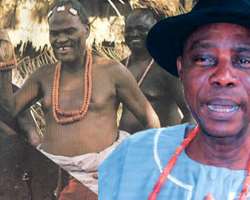 Pioneer film maker in Nigeria and producer of films like Öyenusi”, “The Death of the Black President”, Öil Doom” and many others, Chief Eddie Ugbomah, may have taken the first step, applying for a loan of $1.5million from the Bank of Industry(BoT) to shoot an epic movie that is bound to restore the glory of Nollywood in years to come.

Chief Ugbomah disclosed this development to HVP, during the week.

“The Bank of Industry”, he said, “is the bank appointed as the custodian of the $200 million intervention fund released early in the year by President Goodluck Jonathan to boost the nation's entertainment industry.”

With The Niger Delta Crisis: The Untold story as the title of the film, the veteran film maker said the film will be an up shoot of his “Oil Doom” film which was shot in 1978, and used to forecast the doom that later befell the country.

'I have applied to shoot a celluloid film on either the Niger Delta or Aba Women Riots. I shoot authentic contemporary epics.

You can watch the line of my films, The Mask, The Death of the Black President, Oyenusi, Apalara, Oil Doom.

I forecast the doom in 1978; where are we today? So, these are the kinds of films I shoot to educate, propagate and entertain my nation, to let the white man know that we can do better if given a chance.

“But unfortunately, Nigerians didn't heed to my warning. I'm like Jesus Christ shouting alone in the desert. I'm only asking for $1.5m and I will shoot an epic that can win any award, a Nigerian story, shot in Nigeria by Nigerians and taken to anywhere in the world”. Chief Ugboma stressed.