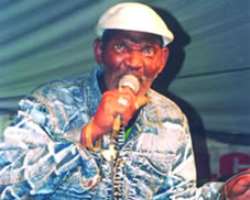 After a rather long lull, the Goethe Institut, better known as German Cultural Centre, last week re-opened its office inside the multi-purpose City Hall on Lagos Island. The ceremony, as expected, was full of tributes, entertainment and promises of better cultural programming for all classes of friends of the centre.

For almost three hours, a sizeable crowd of culture lovers, comprising Nigerians and Germans assembled at the now refurbished Lagos City Hall to be part of the historic event. The guests were first treated to melodic tunes by Berlin- based Jazz singer, Chinaza, who was flown in by Lufthansa.

Shortly afterwards, various speakers, including Director and chief host; Mr Marc-Andre Schmatchtel, gave eloquent testimonies of the new office as having a most befiiting and central location. The guests were thereafter guarded on tour of the various facilities and departments of the new Goethe. Some of these include Language, Programmes, Library, Information among others.

Schmachtel noted that it is quite easy for everyone to locate the Lagos City Hall which now houses Goethe Institut, hence, it needs little or no publicity.The office equally boasts of a good parking space aside providing accessibility social and commercial activities. The director who pledged a new era of increased cultural programming also commended his aides, who have since October last year worked with him. He called for viable partners who can help boost regular programmes at the new Goethe office. Schmachtel also disclosed the proposed celebration of 50 years of Goethe Institut in Nigeria come 2012 and the need for greater co-operation between Germans and Nigerians. He gave out the Institut's website as www.liveinlagos.org.

The duo of Dr Katerina von-Ruckteschell, Regional Director of Goethe Institut from South Africa and Mr Walter von-Den Driesch; Consul-General of German Embassy in Lagos also commended the choice of Lagos City Hall as the new base of the institut. While Ruckteschell described Lagos as the most vibrant city in sub-sahara Africa, with artists and writers playing a great role in developing creativity, Driesch noted that the new location is both symbolic and historically significant.

According to the latter, Lagos is actually better than its reputation and it is quite significant that the city had been hosting Goethe Institut since 1962. Driesch also traced the history of the institut which had for many years promoted international cultural cooperation as well as knowledge of German language in Africa and beyond. He called for better and fruitful cultural relations between Nigerians and Germans, noting that 'culture, and not just visa, is more important to our relations'.

After the speeches which were moderated by Victor Okhai, the guests were again treated to musical performances by German-Nigerian maverick singer, Ade Bantu and his band. Bantu, who first played three hot numbers, Ile Ona Jin, Listen Attentively and Lagos, succeeded in drawing a handful of guests to the dancing floor. He also admonished corrupt politicians through his lyrics, urging them to turn in a new leaf after the coming general elections.

Also veteran highlife meastro, Fatai Rolling Dollar thrilled with several numbers, including his hit Won Kere si Number Wa, to which the crowd mimed and danced. The octogenarian expectedly demonstrated his skills through dancing and stagecraft. Returning to stage after Dollar was Nkechinyere Chinazaekpere Mbakwe, better known as Chinaza, who rendered Take am Easy and other romantic numbers in sweet melodic voice.

Meanwhile, Afrobeat icon, Orlando Julius Ekemode (OJ), sent the crowd partying with his two popular numbers, Jagua Nana and Ijo Soul. He was in company of his wife Latoya and his performance proved to the audience that he is indeed a master of his art.