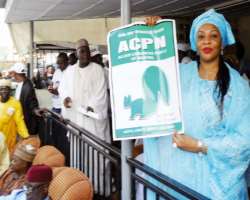 SAN FRANCISCO, March 30, (THEWILL) - With barely 48 hours to the commencement of the 2011 general elections, the Allied Congress Party of Nigeria (ACPN) has alerted of a fresh plot by Kwara State’s Peoples Democratic Party ( PDP) to publish a fake nude photograph of the ACPN gubernatorial candidate in the state, Senator Gbemisola Saraki.

The plot which include an anti female-governor procession to the metropolis from the mosque after Jumat on Friday is allegedly being coordinated by the wife of a highly placed top shot of the PDP in the state.

The revelations are contained in a statement issued in Ilorin yesterday and signed by the publicity secretary of the party, Alhaji Abdulahi Oganija.

According to the ACPN, a meeting held at the Kwara State government house Lodge on Tuesday afternoon where strategies to use against the ACPN at the next Saturday’s poll was discussed including details of the publication of a fake nude photograph of Gbemi Saraki and the recruitment of mainly young men who will carry placards from the Ilorin central mosque after Jumat with the shout of “no to a woman governor in a Muslim State.”

The ACPN informed that the PDP had been planning to publish a fake nude photograph of its gubernatorial candidate for some time, but each time it planned to release the publication, the information leaked even as it remarked that the PDP had tried unsuccessfully to use gender issue against its candidate being a woman, who is also a serving Senator.

The last foiled attempt to publish the nude photograph the party disclosed, was when the printing was taken to Osun State to be done with the intention of smuggling it into Ilorin, the Kwara state capital enroute Kaduna for distribution in Mosques after the Jumat on a Friday.

“That plan was foiled when we alerted the public because we monitored the conception of the idea to super impose the head of our gubernatorial candidate on a nude body up to the time the work was commissioned out and the various stages of the planned execution,” the ACPN statement said.

Disclosing that the vigilance of the ACPN and the love of the people had always made the execution of the criminal intent difficult, the party said the Tuesday meeting was intended to perfect the various plans meant “ to kill ACPN before election begin on Saturday.”

Insisting that ACPN remains the party to beat in Kwara state, the statement concluded that “governor Bukola and his fellow travellers in the PDP should have realised that there is no short cut to electoral victory than allowing the people decide who they want to govern them and represent them at the various level of government.

“No amount of blackmail, intimidation or harassment can erase the overwhelming popularity of our party in the state and its candidate within so short a time and this will translate to electoral victory whether the PDP resort to blackmail or not.”