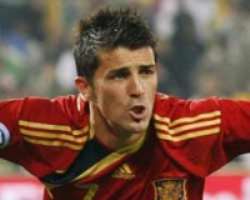 DAVID Villa says that Spain has to shrug off concerns about the state of the pitch for its Euro 2012 qualifier against Lithuania.

His team-mate, Andres Iniesta, revealed that the surface in Kaunas reminds him of the “dirt pitches” of his youth, but Villa knows that the Group I leaders will have to adapt to the conditions. He told the Spanish Football Federation's website: “We would like to play in optimal conditions.

“For our game, a field in better conditions would be better. But we must be realistic. If the referee does not say otherwise, the match will be played on this pitch. We must adjust to the situation there and try to find other virtues we already have, and try to win.

“The three points are vital. We are the Spanish team, we need to win to qualify for Euro 2012 as soon as possible and must adapt to whatever comes.”

Spain is six points clear of the Czech Republic after coming from behind to beat the Czechs last Friday, with Villa's double taking him past Raul as the country's leading scorer. The 29-year old has now scored 46 times for Spain and added: “I'm happy, because the record has been good.

“I still expect to continue scoring many more. Hopefully tomorrow will be a good day, we can win and I can score. The more goals the better it is for the team.”

Regardless of the state of the pitch, world and European champion, Spain, will be hot favourite to maintain its 100 per cent record in the group. It beat Lithuania 3-1 in Salamanca in the reverse fixture but Villa is expecting the home side to again be tough to break down.