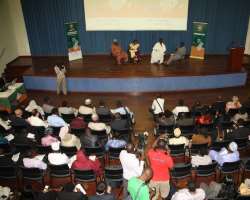 The recently concluded presidential debate has taken discussions about the forth-coming general elections in Nigeria to a different and interesting dimension. Overall, the event was well organised, well attended and more importantly very followed and now widely discussed. Thanks to the internet, and other form of technologies such as the satellite, Nigerians within and beyond the country continue to watch and talk about the debate face to face, via telephone conversations, through text messages and as predictable, the internet abounds with comments and judgments about the debate and the candidates.

The debate was held in Abuja and it was organised and televised by a new satellite TV station, NN24. Some media practitioners and observers seem to have some reservations on why it was a cable TV with foreign affiliations that is organising and televising the Nigerian presidential debate. One of the most articulate of such voices is that of a former director of the NTA. In his own words “We don’t have any business in asking CNN to organise our debate. We have attained manhood in the journalism profession. The transmission was nice, no doubt. I am talking about patriotism not because maybe NTA is better than NN24. We need to do what is ours”. Let us say without mincing words that such reasoning is wrong. What should really matter to us as voters and consumers of information is that the transmission was nice, objective and informative regardless of who organised it. Whilst we are at it, let us add that the one of the reasons why private and international TV stations now thrive in Nigeria is because stations like the NTA are losing what is left of their capacity to inform, entertain and educate.

Just like our schools, hospitals, electric power authorities, the state owned and managed ones are not working and Nigerian citizens are forced to turn to the private sector for education, health and electricity. I am sure the former director of the NTA and those that reason like him will not take their loved ones to the generally badly managed and underperforming schools and hospitals or refuse to use generators at home and in their offices to prove their patriotism. I have some information for them: most Nigerians are exactly like them. News and information generally, is essential in the world we live in today and nobody in their right senses will blindly rely on an NTA or any other station incapable of providing objective, plural, engaging and informative news.

If we have attained manhood in the journalism profession, let us prove it by practising it. Let us do news programmes and investigative journalism that the rest of the world will want to affiliate with.

As for what happened during the debate, the most deafening sound came from the silence produced by the absence of our incumbent President and PDP presidential candidate, Dr. Jonathan. The unoccupied empty podium with its available but unused microphone reserved for our president turned his absence into an unbearable presence. Dear Mr President, public debates constitutes both a symbolic and practical fundamental parts of any election because it is the only chance where voters get to place candidates and their ideas side by side in order to make an informed choice. Debates are also a symbolic democratic ritual that shows candidates have respect for and are accountable to voters; always make sure you attend.

The ANPP candidate, Mallam Ibrahim Shekarau was clearly the best performer during that debate; he came across as articulate, informed and persuasive. His best moments came when he spoke like a middle class professional that appreciates information and planning. He has gained some popularity overnight and with that comes more curiosity and scrutiny over his past, his party, his team and his vision for Nigeria. We shall see how he copes.

The debate also confirmed what we already know of the CPC candidate: the General is a good man but certainly not an orator. General Muhammadu Buhari came across in that debate as a mature statesmanlike candidate that understands the core issues and is familiar the terrain and its complexities. Luckily for him, most people believe corruption and indiscipline are the main problem in Nigeria and they trust he can do it. He needs someone to speak for him.

Although he fought like a lion, it was not a great debate for the ACN candidate Mallam Nuhu Ribadu. Of course starting your debate by having to deny what most people think you said does not help matters. Ribadu appeared passionate and full of hope but restless and lacked presidential aura. Let us face it Ribadu is not Obama when it comes to speech and personality at least not yet so he needs to focus on his other strengths.

The clear winners of the debate were democracy and Nigerian voters and observers.