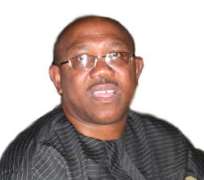 Please Mr. Obienyem, this is a very serious matter. Lives are being lost daily in Anambra as law and order have now totally broken down under Peter Obi's misrule, while you and your boss seem to be having the time of your lives stockpiling our security vote every month. The blood of the innocently slaughtered in the state due to Obi's greed in stealing our security vote at the end of every month with the help of Ndibe Obi, will never let you get away with your financial crimes against Anambra State. While Peter Obi consistently fails to remember to pay our civil servants when due, he however never fails to remember to cart away our security vote on the last day of every month. Note that it was on the last day of last month that N250,000,000 was taken to his private office in Lagos from his office in Awka.

1. Remember that you Mr. Obienyem was booked to fly to Abuja with the 'Governor' on the evening of Sunday the 31st of May 2009 with Arik Air scheduled to leave Enugu airport at 3.30pm but both of you despite having confirmed tickets for that flight could not make it as a result of your presence in Lagos that afternoon.

According to the new Commissioner for Information Chief Maja Umeh, published in the Guardian newspaper of today Saturday 6th June 2009; 'The Anambra State government has again distanced itself from the intercepted N250 million found in one of the vehicles on the governor's convoy in Lagos by the Police on Sunday. Commissioner for Information and Culture, Maja Umeh, noted that Governor Peter Obi was attending to official businesses in Abuja on Monday and Tuesday when the news broke. Umeh stressed that Obi was not in Lagos. The commissioner surmised that the owner of the money hitchhiked the three-car convoy, which went to Lagos for routine maintenance servicing. Umeh argued that joining the convoy was strictly the man's personal decision, which he could have worked out in private with the convoy's drivers. The state government has no hands in it."

Valentine Obienyem was in Lagos with Peter Obi whose only mission in town was to secure the release of those who were detained and to cover up the crime also. A government house source who wants to remain anonymous complained that the Governor's cars are always serviced monthly either in Lagos, Abuja or Port Harcourt, every month-end, depending on where Ndibe Obi is available to receive the monthly security vote from Awka.

Two evenings ago, Peter Obi gave the entire members of Anambra State House of Assembly N60 million as 'Democracy Day' gift. Last night, Peter's Commissioner for Local Government and Chieftaincy Matters Mr. Dubem Obaze, went to the house of the Speaker of Anambra State House of Assembly Chief Anayo Nebe, holding a meeting with members of the House appointed to investigate this matter. Dubem left the Speaker's house much later without the 'Ghana must go back' he had entered with.

Finally, Barrister Obele Chuka is just one of a very tiny minority of courageous Anambra citizens willing to pay the supreme prize in order to rescue our state from the evil clutches of an evil man with a severe split personality syndrome. Our Governor on one hand is a living Saint and on the other extreme, a psychopathic and murderous embezzler of state funds while swearing on his children's lives. Poor innocent kids! Obele Chuka deserves our prayers and support as he battles yet again, another satanic 'Governor' in Anambra State. When shall it be well with Anambra State? Mr. Obienyem over to you.