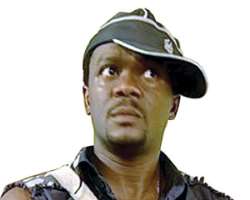 Love him, hate him, bad boy Kevin Ikeduba is a brilliant actor.

On the screen, he's the very 'tough-talking and heartless beast', who stops at nothing to inflict pains on his victims. But in real life, he's as harmless as the snail.

Unknown to many, Bad Boy Kevin of the Yoruba industry indeed hails from the Ibo speaking section of Delta State.

His mastery of the Yoruba language has contributed immensely to his growth.

In this encounter with Showtime Celebrity, the Delta state-born actor explains reasons producers prefer to cast him as a bad boy in movies.

He also explains why he switched over to the Yoruba genre from the English version amongst other burning issues raised by our correspondent, BENJAMIN NJOKU

The Kevin on the screen is an actor who does what he does to earn a living, while the Kevin in real life is a cool and very peaceful guy.

Another thing you need to know is that, if you want Kevin portrayed on screen as mean, he will be. And if you expect him to act the softie, he will do just that. Kevin in real life is the direct opposite of the bad boy, movie created character called Kevin.

On account of your bad boy role, do you sometime get embarrassed by fans who were displeased with some of the roles you played in movies?

I've been embarrassed a million and one times.

But you see, when people walk up to me and confront me because of a role I played in a movie,

I regard it as a form of appreciation. It's a normal thing. Even the Hollywood stars are not spared of such embarrassing moments.

Beyond bad boy roles, one has never seen you act other roles in movies…

Type cast? Yes. Most producers believe Kevin is only good at playing the bad boy role, and this isn't because I cannot play the role of a good boy.

I'm a versatile artiste and apart from acting in the English movies, I also act in Yoruba movies, where I play different roles.

What makes you think that Desmond Elliot cannot play a bad boy role in a movie? He can but most directors will not cast him in such roles because of his baby-face.

The directors believe Kevin has a face hard enough to play the bad boy role. Aside that, he is always fit and ready for such role. All the same, it has never changed anything about me. I remain myself, and I'm comfortable with what I'm doing.

I love challenges and I try to forge ahead. I'm as popular in Yoruba genre as I'm popular in the English version. Yoruba movies have stronger story lines and more deeply rooted. They are also better when it comes to originality.

But that doesn't mean the English movies don't have good stories and it doesn't say all Yoruba films are better.

I don't there is need to segregate between the Yoruba or English actors.
An actor is an actor; the only difference is the language barrier. I don't think that it is bad for any English actor to do a Yoruba film, provided he or she understands the language.

Is there any difference between your kind of role and that of Jim Iyke?

We have movie bad boys and the real bad boys too.

I don't know, but it's left for Jim Iyke to define where he belongs. Jim is bad in his own class, ans I rule in my own world.

It's a long story. But very soon, you will be getting my invitation. It has to do with the ups and downs of a man coupled with the disappointments that come the way of bad boys.

Many actors have said they came into acting by accident, was your incursion too by accident?

Well, you could say that because my incursion began the day I followed a friend to an audition, got auditioned and bagged my first movie role. It was totally unexpected. And as a matter of fact, I began movie career in 2000, soon after graduating from the University of Benin.

What do you think of Nollywood of yesteryears, today and tomorrow?

Nollywood of yesteryears crawled, Nollywood of today is still and tomorrow's Nollywood will run.
The industry is coming and in a good time, we'd be there, I must say.

Kevin grew up as a complete Nigerian because of his penchant and love for traveling. Originally born to parents who hail from Delta State, he grew up in a family of four (two boys, two girls).

He lives here in Lagos, where he had his primary education. He moved to Delta State for his secondary education and finally settling down in Benin, Edo where he schooled at the University of Benin.

He is what many may call a blend of sort, being able to speak fluently, several Nigerian local dialects.