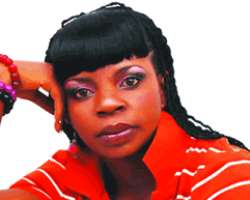 Although, no date had been announced for the release of her debut album, which is scheduled to be out on iRoom Entertainment, a new entrant into the industry, it is expected that the album would be a hit.

The soft-spoken rapper is also a songwriter and had worked with great producers in the music industry.

Before going solo, the rap prodigy used to be a member of a hip-hop movement called Game.

'I have come to take my deserved place in the entertainment industry and contribute my quota too, she added'