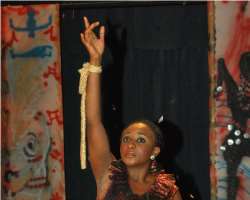 FANS OF DANCE movie would soon be glued to the silver screen as we can reveal that ace movie producer, Emem Isong is at present working on a dance movie entitled I'll take My Chances.

A source says the movie, which is dear to Emem's heart, is centred on dance, an area which the film producer knows too well. Gist had it that the movie is long in coming because Emem had always been interested in doing such work of art. Of interest is the fact that popular actress, Ini Edo and ex-Mr Nigeria, Bryan Okwarra will feature in the movie which will be directed by Desmond Elliot.

A US-based actress is expected to be involved in the film which will be shot in Lagos, Akwa Ibom and Cross River states