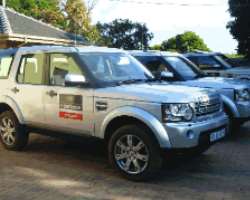 •2011 LandRover Discovery 4
When Land Rover Sub-Saharan Africa invited a section of Africa's motoring press to Johannesburg, South Africa, to see the new Discovery 4, naturally, many a guest expected an improved version of 'the ultimate all-purpose vehicle' - the most decorated SUV ever. And they were not disappointed!

The 2011 Discovery 4 that was introduced to the journalists - and test-driven through hundreds of kilometres of asphalted and 'jungle' terrains – was the typically Land Rover, with all the attributes that have earned for it more than 150 reverred awards since its premiere in 1989 (20 of such honours were bestowed in the past one year).

But, the Discovery 4 is now flaunting even more features that will definitely enhance its reputation as a versatile on/off-roader with what it takes to impress luxury car lovers, MPV customers and 4×4 freaks, without exception.

In fact, the philosophy behind the making of the 2011 Discovery 4 was encapsulated in the introduction by the General Manager of Land Rover Experience Kyalama (a string of testing facilities on the outskirts of Johannesburg), Sean Renton, who disclosed that the aim was to allow it share some of the features of the iconic and bigger Range Rover, in order to push the boundary of luxury.

Aside the well-performing petrol engine, the Land Rover is introducing a new 3.0 LR-SDV6 as the entry level choice for Discovery 4 customers. The new version of the acclaimed, parallel sequential turbocharged diesel engine now replaces the 2.7 LR-TDV6 and matches the low CO2 emissions and impressive fuel economy of its more powerful 3.0-litre sister. It sets new standards of refinement and fuel economy, offering 10 percent more power and 15 percent more torque than the outgoing 2.7 litre version.

Also improved upon is the Terrain Response system in the form of Hill Start Assist and Gradient Acceleration Control. Now this: The astonishing 5.0 LR-V8 naturally aspirated engine, brand new in 2011 and designed specifically with Land Rover vehicles in mind, remains in the Discovery 4 line-up unchanged for the 2011 model year. The lightweight aluminum alloy engine is both super-efficient and compliant with the stringent US ULEV2 and European EU5 emissions regulations.

The LR-SDV6 3.0 and the LR-V8, all drive through the ultra-refined ZF HP28 6-speed automatic transmission. The Discovery 4 suspension system was substantially revised for 2011 with changes to roll centres, anti roll bars, suspension knuckles, damper bushes and the addition of a variable ratio steering rack for greater stability during high speed cruising and increased sensitivity at acute steering angles.

Indeed, it was during the off-road drive, especially at the Land Rover Experience Kyalama and the hillsides and valleys of Entabeni Game Reserve, some 300 kilometres off Johannesburg, that the 2011 Discovery 4 proved that it has been more endowed to retain the honour of being one of the most capable off-road vehicles. The additional innovative systems are Hill Start Assist and Gradient Acceleration Control. Here is how they function:

In a steep uphill position, Hill Start Assist retains the initial driver-generated brake pressure long enough for the foot to move from brake pedal to throttle without the car rolling backwards. The brake is released after a sufficient time has elapsed or when the engine is supplying enough torque to move the car up the hill. Hill Start Assist is always available, not selectable, and neither is its operation indicated to the driver.

On the other hand, Gradient Acceleration Control is designed to provide safety cover on severe gradients when the driver does not have Hill Descent Control engaged. By pressurising the brake system, Gradient Acceleration Control slows the car to a limit determined by the throttle position when the car is descending the slope in the driver's intended direction of travel. This includes descending the slope forwards in drive, or rearwards in reverse.

The Discovery 4 gets three exciting new paint colours for 2011, Fuji White, Baltic Blue and Siberian Silver. One small, but important feature is the Land Rover oval badge which has been given a colour change from gold on green to silver on green creating a more contemporary look. The badge appears on the grille, tailgate, steering wheel and wheel centre caps.

There's a change of identity too. To distinguish between the two power options, 180kW models are badged SDV6 and the 155kW models badged TDV6. Beyond the slight fresh exterior identity, the supremely versatile seven-seat 2011 Land Rover Discovery 4 (can be configured to take less seats, depending on need) features a premium cabin, which combines the smooth, flowing surfaces and the minimum number of controls for an uncluttered environment.

A good number of the functions, like cruise control, can be manipulated by the driver on the steering wheel without losing focus. Even the terrain control knob (for an innovative system which adapts the vehicle to rocky, sandy or normal surface) is within easy reach. Checks at the Mazamaza, Lagos office of Coscharis Motors Limited, Jaguar Land Rover representative in Nigeria which sponsored the trip to South Africa, could not confirm when exactly the 2011 Discovery 4 would hit the dealer's showrooms across the country.

However, the Head of Marketing, Ifeanyi Nihe, told Daily Sun Motoring that the first batch vehicle would arrive 'soon'.