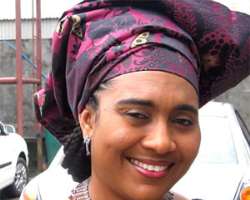 Hilda Dokubo
Vanguard gathered that Dokubo had boarded a Lagos-bound early morning commercial flight and had hardly settled down on her seat when a text message alerted her of a bomb being planted in the aircraft she had boarded.

She promptly informed the captain of the plane who quickly ordered for the evacuation of the jetliner. The plane was later searched but the outcome was not disclosed to newsmen.

But Police PRO Rita Inoma-Abbey (a DSP) told Vanguard that she had not been informed of the development.  However, a source at the airport said the actress was still being questioned as at press time yesterday.

The bomb scare is coming on the heels of the threat by the Movement for the Emancipation of Niger Delta, MEND that it would go on the rampage with bombs in Abuja, Lagos and Niger Delta.

Also in another development an explosion occurred on the Atlantic fringe in Ekeremor local government area where the Nigerian onshore oil flowstation operated by Agip in the Niger Delta is situated .

The explosion was heard in the early hours at Agip's Clough Creek oil flowstation in Bayelsa, sources said.