Osita Iheme of ‘Akin and Paw Paw’ fame on suicide watch …After being dumped by a London based model, 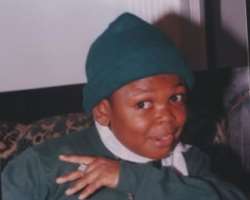 Osita Iheme of the ‘Akin and PawPaw’
Listen to article

Nollywood star, Osita Iheme of the 'Akin and PawPaw' fame, is on suicide watch. According to Sources close to the talented actor, who played John Okafor's son in 'Mr Ibu', Iheme had proposed marriage to the vivacious Brenda Gowon, who played along for a while, but later dumped him claiming he was too tiny.

After a lavish ceremony in Abuja, with gifts worth thousands of dollars, Brenda who is a a model and actress, just took off. Unable to take the shame , Iheme opted to kill himself, overdosing on sleeping pills.

Osita met the vivacious Brenda Gowon on the island of St. Matins during the Christmas holiday where a show was held to introduce Gucci's new line of spring accessories to buyers and selected VIPs.

Brenda is the grand niece of one of Nigeria's most prominent Yoruba families. A model and actress in England, the beautiful always elegant, long legs Brenda with the hazel eyes is no stranger to high fashion and society.

It was a beautiful night in the Caribbean. The wind brushed softly against the cheeks of the rich and famous dressed to the nines. Stunning in a black Versace gown, silver diamond chocker and a glass slipper to match, Brenda was the apple of every man's desires.

Osita told a close pal.” The moment I saw her, I felt the earth move under my feet.” “The air got heavy and I could not breath,” It was love before first kiss.

Osita paid the organizer of the extravaganza to sit him next to Brenda. He bought a $ 3000 watch, $700 sunglasses and $1,500 Gucci purse. Osita had them wrapped in a gold jewelry case and sent up to Brenda's. She loved the expensive gifts.

A whirl wind romance began and by February, Brenda was in Abuja to meet Ostia's family.

The night hummed with music as the guest drank champagne and moet. Osita climbed upon a table and finally drew everyone's attention when on bended knee, Osita presented Brenda with a $10,000 green, one caret diamond ring. Brenda picked Osita of the table and look into his eyes. Then she planted a passionate kiss upon his lips.

But two months after the engagement Osita was rushed to the hospital from an overdose of sleeping pills? Brenda back in England did not pick up his calls . All she said upon arrival at Heathrow was that Osita was too tiny. Now back in Nigeria, the whole marriage business is over, “Osita is no more marrying the babe. The chic just came to chop and clean mouth. Now, the guy is even denying he ever called the girl his wife to be.”