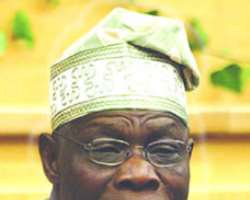 OBJ
It was a bad outing for Ogun State Governor, Otunba Gbenga Daniel, yesterday, during the President Goodluck/Sambo Presidential Rally at the Gateway Stadium, Abeokuta, as he was booed by the crowd three times as his name was mentioned during the ceremony.

The ugly development is on the heels of a peace meeting between Governor Daniel and former President Olusegun Obasanjo brokered last Friday by eminent lawyer, Chief Afe Babalola, and others at Obasanjo's Hill Top private residence in the state capital.

Until the peace meeting, there had been supremacy battle between Daniel and the former President over the soul of the Peoples Democratic Party (PDP) in the state. At the heat of the feud, supporters of the governor had called Obasanjo unprintable names at a rally in the state.

The bad moment started for the governor when the PDP National Publicity Secretary, Prof Ahmed Alkali, was reeling out names of some great men of the state and he mentioned the governor's name, which prompted loud jeers from the PDP supporters and others at the venue. The governor also incurred the wrath of the party's supporters when the state PDP chairman, Chief Dayo Soremi, acknowledged Daniel's contribution to development of the state.

While the humiliation lasted, Daniel, who was sandwiched between Obasanjo and President Goodluck Jonathan, maintained his cool as he fiddled with his telephone set. The unpleasant development attracted condemnation from Obasanjo, who urged the crowd not to pay Daniel back in his own coin.

Obasanjo, who was visibly angry as he spoke, said: 'What you have just done is very much uncalled for. If I did not come here and say it, I will be failing in my duty. It does not matter what Governor Daniel must have done or might not have done. In Yorubaland, we respect two things among others – age and authority.''

He continues in Yoruba language: 'If you are not a bastard, if you see an older person, you respect him. Until May 29, Governor Gbenga Daniel remains the governor of this state. He must be accorded the respect, dignity, the honour that he deserves. 'If he does not give anyone that respect, we don't pay him in his own coin. You must show that you are well bred. I take serious objection to you booing him here when his name is called and that should not be done. Today, Otunba Gbenga Daniel is the governor of Ogun State. He must be accorded respect no matter whatever he has done. Don't pay him in his own coin.''

Obasanjo, who also spoke on the need for a Yewa/Awori governor, said all but one of the three senatorial districts in the state had produced a governor except Ogun West. 'So if we want to keep this state together in peace, unity and stability, we have to give the (Ogun) West the chance, and we must look for the right person, a man of character, a man of achievements, a man of unimpeachable track records and that is what we have in Adetunji Olurin.''

As a party, the chairman of the PDP Board of Trustees advised the party to avoid anything that would tarnish its image. On the ambition of President Jonathan to return to Aso Rock, Obasanjo assured him of the support of the Yoruba nation, saying the South West had always been steadfast, reliable on his presidential ambition. Addressing the gathering, Jonathan said a vote for Olurin is a vote for Jonathan.

'We thank people for supporting PDP at the primaries, which ensured our victory and we promise not to disappoint you.

'Ogun State has contributed so much to the development of the country, especially in human capacity development. Our Awolowo showed us the light by giving us free education, former President Olusegun Obasanjo, Fela Anikulapo in music, Ransome Kuti in health, Tai Solarin in education, Moshood Abiola and Rotimi Williams among other things.

Jonathan, who arrived Abeokuta through a rail ride from Lagos, said it was the vision of the former President Obasanjo that Nigerians should travel through all part of this country by rail. 'Without power, we cannot develop, especially the small and medium scale enterprises.

That is why we have established the National Integrated Power Project and we have started some of the test run. Some have already taken off and some still under way. We have confidence that by the middle of this year our power generation would have been greatly stabilized,' Jonathan said