WITH ONLY N300, VARIOUS AILMENTS ARE TREATED 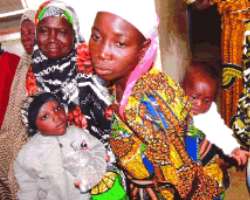 Jemilat Abdul with baby delivered through C & S
Right from inception, one of the major thrusts of Governor Bukola Saraki's administration in Kwara State is the provision of quality and affordable healthcare for the people in the state. Indeed, before Saraki came into office in 2003, the healthcare delivery system in the state was in shambles, as there was total neglect of the health sector by successive administrations.

One of the first steps Saraki took to arrest the deplorable health situation in Kwara was to convene a health summit, the first in the history of the state. Having identified the problems and solutions proffered, Saraki commenced tackling the deficiency of drug supply to health centres, replacement of obsolete and outdated medical facilities, review of salaries of medical personnel and other malaise inhibiting quality healthcare delivery to the people. Today, Kwara is rated one of the best in the nation on healthcare delivery.

However, of all the many innovative health projects and programme Saraki introduced to develop the public health sector to the World Health Organisation (WHO) standard, the most revolutionary was the Community Health Insurance Scheme. Done in partnership with Hygeia of Netherlands, the scheme offers a comprehensive healthcare delivery to the people all year round at the payment of a token N300 per annum. It was the first of its kind anywhere in Nigeria.

The pilot of this novel health insurance scheme was launched in Shonga, a rural community in Edu Local Government Area.

The scheme had since been replicated in Patigi and Asa Local Government areas of the State. Plans are on to spread it across the 16 local government areas in the state.

Shonga Health Centre, which hosts the Health Insurance Scheme, used to be derelict, with little patronage from the community dwellers. However, with the total renovation of the place and provision of medical facilities and personnel, courtesy of the health insurance scheme, the place is now a beehive of activities and the community dwellers turn out in thousands for their medical needs.

The Shonga health centre attends to all ailments, including surgical operation. Between 15 and 20 surgical operations are performed every month, according to the centre's records. Some of the patients, who had benefited from the scheme showered encomiums on Governor Saraki for giving them a lease of life through the scheme.

A beneficiary, Yusuf N. Shonga, was blind for 20 years. According to the old man, he had sought cure for his blindness from far and wide and had given up hope of ever been able to see again in his life, when he was informed of the health insurance scheme.

'Ironically, I was initially hesitant when told of the scheme. Some people even dissuaded me from coming to the hospital, saying the doctors would use their knives to worsen my condition. But the nurses here persisted, in their efforts to convince me and that persistence eventually paid off and I went for the surgical operation and miraculously I regained my sight,' he said.

Asked his first reaction when he opened his eyes and found out he could now see, Shonga, in an emotional laden voice, said: 'The first day I regained my sight, I burst into tears. I had been living in darkness for about 20 years; I never knew I could ever see again.

'I knelt down immediately to thank the Almighty God for the miracle he brought to my life. Can you believe that all it cost me was N300? I thank Governor Saraki for making it possible for poor people like me to enjoy this wonderful healthcare delivery.'

Another beneficiary, Adamu Ndanusa, said he had been blind for five years before he underwent a successful eye surgery at the health centre.

'Before that, I had visited many places for medical attention to no avail. Today, I can see clearly. I am grateful to the state government and thankful to God. I paid only N300 for the surgery and treatment,' he said.

Mallam Jubril Gana, 45, was in death throes of hernia, but resorted to unorthodox medical treatment, because he was misled by the superstitious belief that the hernia must not come in contact with knife, which will result into an instant death. A good Samaritan, however ,succeeded in persuading him to forget the superstition and take a chance at the health centre. He did and today he is alive and very happy to tell the world his story.

He said: 'It is indeed, a miracle. I could have died out of ignorance. The hernia was at advanced stage. Since I was operated upon, the ailment has disappeared. I'm grateful to God and Saraki's government for its assistance,' he said.

Gogo Mohammed, a 65-year-old grandmother, is another beneficiary who regained her sight through the scheme after being blind for two years.

'I was treated here at the Shonga Health Centre after paying N300 for the scheme. Now, I can see clearly. We got to know about the scheme through the Emir of Shonga and the state government. We have benefited immensely from the scheme,' she said, adding that she only pays occasional visits for check-up at the health centre.

Mohammed Ahmed, too was blind for 11 years. Like others, he had visited several orthodox and unorthodox medical homes to no avail. According to him, his experience at the health centre was nothing short of a miracle.

Blindness, he said, is tantamount to worthlessness. 'A blind man, no matter his status in the society, is worthless. Governor Bukola Saraki has left his imprint in the sand of time with the presence of this medical centre in Shonga. Kwara and the whole of Nigeria cannot forget him in this regards,' he declared.

Aminat Magaji was literally snatched from the jaws of death after she was rushed to the health centre unconscious, with dead foetus in her womb. She went through caesarean operation through which the dead foetus was successfully removed.

Magaji, 20, gave thanks to God for saving her life. She was also full of praises for the Kwara State government, through which the medical provision was made.

'I thank God. I thank our governor too for saving my life and those of others in the community too,' she said.

Mrs. Jemilat Abdul is a nursing mother, whose child was delivered through C & S at the centre. She was full of praise for the government for locating the health insurance scheme in Shonga.

According to her, the presence of the scheme in Shonga has improved the health condition of the people in the community. 'Many of us can never forget Governor Saraki for the gesture,' she said.

The Chief Nursing Officer of the Centre, Alhaji Suleiman Yusuf, in his reaction, commended the role of the traditional rulers in mobilising the people of the community to enjoy the rare benefits the scheme offers them.

He described many of the beneficiaries beaming with joy and happiness now as reluctant draftees.

Said he: 'The traditional rulers are the ones mobilising the people. The medical team and representatives of the Emir move from village to village in sensitising the people on the need to patronize the hospital.'

Alhaji Yusuf added that the villagers have wholeheartedly embraced the scheme as they can see the advantages inherent in it.

'On a daily basis, we receive minimum of about 120 cases. The beneficiaries need to pay a sum of N300 each per annum, then the providers will pay the remaining N1700. We have three referral hospitals. They are University of Ilorin Teaching Hospital (UITH), Ola-Olu Hospital, in Ilorin and Ogo-Oluwa Hospital in Bacita. When we send them to those hospitals, they don't pay a dime. It is free, as far as such a patient is registered and the card is working.

'The treatment is jointly sponsored by the providers and the patients. The treatment we give per month is more than N2000. The drugs, laboratory equipment etc, are being supplied by the state government.'

'It is when you don't have amenities to work with that you decline to work in the rural area and you will not be motivated to work. We have all the materials we need to work with at our beck and call,' he noted.

Alternate nurse at the hospital, Mallam Yahaya Mohammed, also attested to the acceptability of the scheme by the villagers. He said the hospital, each month, attend to between 15 and 20 cataract and surgery cases.