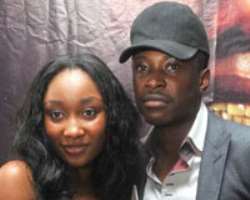 “This is a warning to you. It has come to our notice that you have produced a video about the problem in the Niger-Delta without proper consultations regarding the true state of affairs in the area. You are hereby warned not to release that video or be faced with grave consequences.

We are very well informed about your daily routine and that of your child. Your address is 35 Colorado Close, Maitama, Minister's Hill and your child schools at Ecole Francais Marcel-Pagnol d'Abuja, Durumi district,Abuja. Be warned”!

Those who have watched the movie said it amy have revealed some uncomfortable secrets behind the struggle of the Niger-Delta and how some disgruntled leaders are playing politics with the lives of the citizens.

These and more are what the said group does not want to be a public knowledge.

The Niger Delta region of Nigeria has 606 Oil-fields and exports 50% of all its oil resources to the United States and is the world's capital of oil pollution.

Corrupt government officials, greedy oil companies and violent rebels go on a war path over oil spills and the degradation of the land caused by oil exploration

The film x-rays fifty years of uncorrected oil spills and lack of clean-up which has destroyed the environment and ecosystems leaving the area almost uninhabitable while obliterating the livelihood of its residents costing them basic human rights such as health, access to food, clean water, and an ability to work.

Black Gold was to be premiered on February 24th at the Silverbird Galleria in Lagos but the latest developments may have distrupted the plans of the movie producers.

The film produced by Starkid productions owned by American based Nigeria, Ori Ayomike, was directed by Jeta Amata in collaboration with Suzanne DeLaurentiis was shot in the Niger Delta region of Nigeria and in Los Angeles, California.