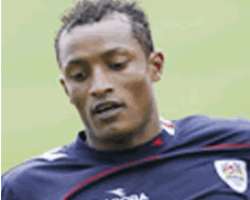 • Tefera
Ethiopia may not boast of the kind of quality players at the disposal of Nigeria's Samson Siasia's Super Eagles, but her South Africa-based hit man, Fikru Tefera is one player no opponent can afford to ignore.

In fact, the gangling forward, who plies his soccer trade with SuperSport United, is one player Coach Iffy Onuorah is banking on to spring a surprise at the Abuja National Stadium on March 27 in the make or break Nations Cup qualifier.

Interestingly, the 25-year old player is the only foreign based on the list of the 27 called up by Onuorah for the match. Given Tefera's experience, everything points to his being a torn on Eagles' flesh, a situation that would require skipper, Joseph Yobo and his teammates to keep a close tab on him if he must not wreck havoc in Abuja.

Tefera, this season, returned to SuperSport United after a two-year loan spell with top Czech Republic side, FK Mlada Boleslav. SuperSport handler, Gavin Hunt, is a big fan of Tefera and was instrumental to his returning to the club. The goal poacher is at present the toast of both SuperSport and Ethiopian fans. SuperSport fans are banking on him to get past Egyptian giants, Al Ahly in the CAF Champions League when Ahly visits Pretoria next weekend.

Tefera is reported to be looking forward to the Abuja game with confidence, even as he has vowed to use it to prove that he is as good as the Nigerian legion.