THE BATTLE FOR EDO SOUTH 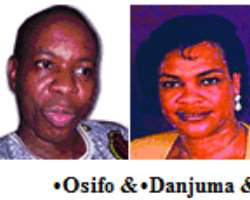 
The atmosphere is charged. The people are waiting for the great political fight. It is the fight for the control of Edo South senatorial zone which comprises the seven Bini-speaking local government areas. The Edo South contest would determine the tempo of things to come in the politics.

Since the inception of the present political dispensation, Edo South has been a stronghold of the Peoples Democratic Party(PDP) until 2007, when the Action Congress of Nigeria(ACN), then Action Congress(AC), gave it a strong fight. Though , the PDP candidate in that election, Senator Ehigie Uzamere won, he had since defected to the ACN. He is the party's candidate for next month's election.

In the polls, three candidates -Senators Uzamere, Daisy Danjuma(PDP) and Hon Isaiah Osifo, Labour Party (LP) would be slugging it out. Uzamere is the incumbent senator. Danjuma is the wife of General Theophilus Danjuma, while Osifo is a former chairman, Uhunwonde Local Government Area and ex-chairman of Association of Local Governments of Nigeria (ALGON) . He was also the Chief of Staff to former governor, Osareheimen Osunbor.

The trio would be banking on their pedigree. The key factors that would play decisive roles in the election is the antecedents of the contestants and the fact that no senator has done two terms in the area.

Daisy Danjuma
Daisy represented the senatorial zone between 2003 and 2007 for the PDP. In 2007, her quest to return to the Senate hit the rocks. The party leadership handed the ticket in the 2007 election to Uzamere, who contested and won. Her failure to get a return ticket to the Senate in 2007 is said to be attributed to her stance on the tenure elongation saga of former President Olusegun Obasanjo.

In the last party primaries, she defeated a former Commissioner for Land and Survey, Henry Idahagbon to pick the PDP ticket. Analysts say for Danjuma to be seeking a return to the Upper Chamber of the federal legislature means she has high hopes of winning the election. Her greatest strength in the election is her deep pocket.

But one issue that has been a reoccurring decimal in her campaign is the fact that by marriage, she is now from Taraba State. Not a few think that she should play her politics in her husband's home state. Danjuma, in reaction to this sentiment, stated in an interview with a national daily (not The Sun) recently that those holding on to such positions are ignorant of what the Federal Character Commission Act says on the status of married women when it comes to contesting elections. ' As a woman, I can contest election in Taraba and Edo states…I have won an election here before. And if my people accepted me, why should I go to somewhere else?, she argued.

Besides, one major issue Danjuma has to contend with in the election is alleged non-performance during her first term. Critics alleged there was no concrete thing she can point to as being her achievement for the people.

Ehigie Uzamere
Uzamere is the current senator. He was elected into the Senate in 2007 on the platform of the PDP. Unsure of getting a return ticket to the National Assembly on PDP ticket, he defected to ACN where he picked the senatorial ticket.

Uzamere is banking on the ACN myth in the zone and the personality of Governor Adams Oshiomhole to win the April 2 senatorial election. Until recently, the ACN has maintained a strong and cohesive front in the area. But if what the senator is relying on to win the election is the party, he may be shocked.

In recent times, things have started to fall apart in the party.

The primary to select its candidates has created bad blood amongst party members. Besides, Uzamare's emergence as the ACN candidate has not gone down well with a lot of party faithful, particularly the supporters of Mr Matthew Urhoghide, who contested for the ticket with Uzamere. Urhoghide was the Action Congress(AC) senatorial candidate in 2007. Not a few party stalwarts believe he should have been given the ticket again, especially as he has been steadfast in his support for the state government. Though Urhogide has remained in the party, there is no doubt that he is very much aggrieved.

Senator Uzamere's success in the election would depend majorly on how he manages the problems thrown up by his emergence as the ACN candidate.

Isaiah Osifo
Osifo believes that he is best suited to win the seat. The once very powerful Chief of Staff had hoped to actualize his ambition within the PDP. He has to move to LP due to dissatisfaction with the senatorial contest.

Osifo would be relying on his grassroot contacts and what he described as the abysmal performance of both Danjuma and Uzamere. He told Daily Sun that after the exit of Senator Roland Owie from the Senate in 2003, Edo South has never had a purposeful representation. Owie, a former Chief Whip of the Senate, represented the zone between 1999 and 2003. 'Owie tried his best as the senator of the Edo South . And he was able to attract some projects to the district. After Owie, we didn't have a senator giving us adequate representation', he stated.

The Edo ALGON boss also dismissed the ACN as a force in the senatorial zone.

According to him, 'it is wrong for anybody to say that ACN is strong in Edo south. It is not strong. It is not firm. It is a political party that has in place a mob government. You know what is a mob government? People just come together, acquire power, go to the street, rely on hypocrisy, sloganeering, propaganda and those that are not sufficiently informed will say halleluyah and begin to clap their hands. You cannot see policy thrust or direction of that particular government.'

But besides Osifo's optimism , he would have the platform he has chosen to pursue his ambition to contend with. The LP is known not to have visible structures in the state. So, the challenge before the former LG boss would be to breathe life into the LP within a very short period.

Beyond all this, the people of Edo South may be voting for the individuals and not the party in the April elections. In which case, it is the antecedent of the candidate that would determine who would win, especially if the 'one man, one vote' campaign being propagated in the state is allowed to play out.