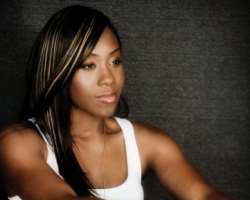 A ghastly motor accident almost claimed the life of budding Nigerian Singer/song writer , Yemisi May Odegbami better known as May7ven at about 5am on Saturday, March 6, 2011 while returning from a Lagos night club.

Apparently, May7ven had been hanging out with colleagues, 2face Idibia, Denrele Edun, Timaya and Tiwa Savage at the Movida Night Club situated at Idowu Taylor Street, Victoria Island, Lagos when she called it a day and decided to leave with her entourage.

She along with four members of her team including her sister, were riding back home when the SUV they were riding in suddenly collided with a truck. The truck driver was believed to have been sleeping on the wheels.

While May7ven sustained injuries to her head, a certain lady named Funmi had her ribs injured and other passengers suffered minor injuries.

Luckily, Ms. Odegbami and other passengers were all rushed to Emel Hospital situated at 21 Road, Z Close in Festac Town, Lagos to receive treatment. May7ven sustained a tear in the face, which has now been stitched.

The Oyo state born singer while on the sick bed spoke to our source briefly on the phone at about 6.00pm yesterday, confirming the incident and giving the name of the hospital she's been admitted as EMEL Hospital, Festac town.

By the time out reporter arrived at the hospital few hours later, the 26 year old daughter of Ex-Nigerian Footballer, Segun Odegbami had been discharged.

'I've been discharged, I'm home now', she told us over the phone.

May7ven's grew up in UK where her professional career began back in 2008, but has now set her sights on the highly competitive Nigerian market to make a name with her video 'Bo so lara mi'.