IMF and the pursuit for Naira’s Devaluation 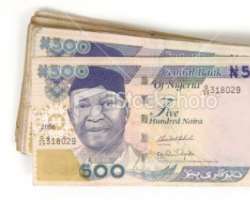 The devaluation of Naira recommendation by IMF is without logic

The International Monetary Fund (IMF) is an organization founded with a prime objective of stabilizing international monetary exchange rates and facilitating development through the application and enforcement of liberalizing economic policies to its 187 member countries which includes Nigeria.

This time around IMF has definitely proven to us that its recent prescription for Nigeria to devalue her currency naira is not based on sound and logical economic proposition. Not that any time in the past that IMF monetary recommendations on and for developing economies have been logical. In the 1980s when many developing nations especially in Africa were cash scrapped and were in deep recession they turned to IMF as a lender of last resort. The period marked the nadir point of haplessness in Africa due to IMF's structural adjustment program known as conditional ties given to these countries before they could be eligible for the loans they were asking from the institution.

Nigeria this time is not asking for any intervention from IMF. The economy of Nigeria is growing progressively at above 7 percent and naira is relatively strong and stable. The weak point that can be perceived from the economy is the growing deficit trade especially from China, rising inflationary pressure and continuous depletion of the crude account by excessively withdrawal. Even with that Nigeria has a substantial foreign reserve which falls to U.S $33.12 Billion in January. But thanks to rising oil price the reserve will commence to replenish and grow.

The volume of the foreign reserve is not bad by any standard especially with regards to the country's GDP which was growing at 7.4 percent in first quarter 2011. The point is that Nigeria has adequate war chest to defend naira and ward-off aggressive currency speculators. Therefore IMF suggestion that currency is overrated has no basis for Nigeria can defend her currency standing in the global currency market. Moreover the local high demand of dollar has become a check on the value of naira.

Afripol organization experts discussed the issue of IMF and naira's devaluation. Afripol concluded that there is absence of monetary logicality for devaluation of naira.

Gideon Nylan, an expert on political economy of developing nations at Afripol, concluded, "The Nigerian middle class has yet to recover from the IMF devaluation of 1986. Suddenly teachers, lawyers, doctors, and civil servants saw their life savings disappeared. In order to support their families and create a better living for themselves, they left the country for greener pastures in other countries."

Emeka Chiakwelu, Principal policy Strategist at Afripol commented, "Bretton Woods institution (IMF) asking Nigeria to devalue her currency is akin to throwing kerosene to a burning fire. There is no logic to that, Nigeria's currency has already been steadily diminished by the rising inflation and further devaluation is contrary to a sound economic judgment."

Chiakwelu noted that, "IMF should be in business of enhancing an economy by giving logical counsel not by depreciating methodology. IMF has the power to increase Nigeria's special drawing rights (SDRs) and including naira into 'basket of currencies'. Instead IMF chose to play a role that will be increasing the price of foods and raw materials in Nigeria by devaluation of naira. "

Beware of Trojan horse coming as IMF helping- hand because history has proven that it has severe ramification. What will be the justification for Nigeria to devalue her currency?

The economy is not wholly export base except crude oil and the economy is not diversified with array of manufactured products for export. The logic of devaluation is to induce and increase export by lowering the prices of local manufactured products making them attractive for export. But that is not the case with Nigeria, a mono-product exporting country, crude oil which generates about 90 percent of the country's foreign exchange. By devaluating naira the price of oil will nosedive and country's foreign reserve will dwindle, while the incentive to buy Nigerian fiduciary bonds and securities in international market will depreciate.

To be factual Nigerian currency naira has already be weaken by rising inflation. At this point in time the inflationary trend is gradually creeping into the monetary base and with that naira is gradually but steadily losing its ground. Therefore what is logic of further devaluating a currency already weaken by rising inflation and by so doing summon a hardship that will be felt by majority of Nigerians. Most of the products and materials utilized by final consumers and raw materials in Nigeria are mostly imported from abroad. With the devaluation of naira importation and oversea products will become more expensive and out of reach of majority of Nigerians.

Devaluation may discourage importation and foreign products in Nigeria as a result of the subsequent appreciation of foreign currencies for trading notably dollar as naira loses value. But with that Nigeria may not gain or take the advantage because the economy is not diversified and our local production is still at the rudimentary stage. Nigerian industries are still dependent on foreign expertise and raw materials to function at a reasonable capacity and with devaluation of naira the prices of dollar and pound will soar with relative to naira. Subsequently, it will have adverse effect in our growing local industries. The prices of food and agricultural products will be high away beyond the masses in a nation where 70 percent of the population survived with less than two dollars per day.

African experience in 1980s with IMF left a bad taste in their mouths, when the cash strapped African nations turn to IMF for credit. It became a disaster for Africa and the consequences of Africa's entanglement with IMF sow the seed for economic depression in today's Africa. IMF's conditional ties for loans were so stringent for these nations to swallow. It was called structural adjustment programs which will supposedly reform the economies.

The pathways to IMF's structural adjustment initiative were paved with hardship and misery. These nations, poor nations of Africa were compelled to cut their spending drastically without putting into consideration the suffering of the masses especially women and children. On the wise counsel of IMF and its Ivy League experts African nations devalued their currencies on the grounds that it will increase export.  They failed to see that most African nations were not producing anything but relied on agricultural crops and donors to finance their budgets. With the devaluation the price of crops decline sharply on the international market and Africa's yoke enhanced.

The criteria for obtaining loan by devaluation of currency coupled with neo-liberal economic policy based on liberalized trade and open market was once IMF prescription for Nigeria in 1980s. At that point in time Nigeria was being heaped with foreign debt and was falling behind in the service of her foreign debt. Thus it became difficult, if not impossible for the country obtain line of credits unless the swallow the austerity measures given by IMF. The consequences were annihilation of infant industries and untold hardship of average Nigerians. The problem of Nigeria then was more of mismanagement and misplacement of priority.

But that is not the case with the present Nigeria that is not seeking any loan or aid from IMF. Nigeria GDP is bulging with economy projected to grow at more than 7 percent in 2011, although with vulnerabilities of inflation and excessive spending and depletion of foreign reserve. The withdrawal may make sense because the country needs to defend the value and stability of naira from international and aggressive speculators.

Nigerians for one moment can walk a little taller, knowing quite that the caliber of men and women at Central Bank of Nigeria (CBN) led by Governor Sanusi Lamido are willing to stand up when necessary and defend the economic and financial interest of the country.