CBN WORRIED ABOUT ANOTHER ROUND OF NON PERFORMING LOANS IN BANKS 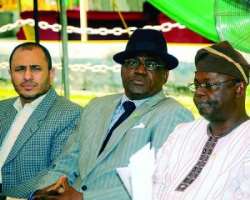 The CBN has raised fresh alarm over mounting non performing loans in the banking system, even after it intervened in eight banks two years ago, those close to the CBN authority have disclosed. According to them, the CBN Governor, Sanusi Lamido Sanusi, in October 'advised that the Banking Supervision Department (BSD) should identify the customers with huge non-performing loans, and review the risks posed to banks if monetary policy stance was tightened'.

It was gathered that the CBN management is thinking that a second look be taken at the individual banks with large non-performing loans in a bid to taking a proactive action so that another banking crisis would not surface.

But it was learnt that the Deputy Governor, Financial System Stability, Dr. Kingsley Moghalu, has tasked the Banking Supervision Department of the CBN to resolve the non performing loans problem existing in banks.

It was gathered also that the CBN management is worried by the continued drop in the nation's foreign reserves, concluding that 'there was a puzzle to be unravelled to know why foreign exchange reserves had been falling, as oil production and prices were rising.'

The CBN internal report, Vanguard gathered, indicated that oil export volumes had recovered in 2010 relative to 2009 on account of the rebound in both output and prices, but not yet to the level attained in 2008.

The CBN's portion of the external reserves had also been falling since August 2008 due to the high demand for foreign exchange. The report also showed that during the period, payments to the joint venture partners for cash calls and subsidy deductions for the NNPC rose significantly.

According to the report out of the N200bn refinancing/restructuring facility the sum of N139.199bn had already been disbursed through the BOI while N69.47bn had been approved for disbursement as second tranche; and amendments to the guidelines for the scheme had also been approved.

The report noted that the budget deficit reported arose from huge government expenditure for subsidising the consumption of petroleum products, and the increased wages to federal civil servants, the loss of revenue through duty waiver on rice imports, and the joint venture cash calls, among others. The CBN management agreed that fiscal discipline and structural reforms were needed to reduce the huge budget deficit.

On money market rates, it was also noted that the spread between the open buy back (OBB) and interbank rates reflected the credit risks in the industry.

The report said that the spike in interest rates in October 2010 arose from information and communications technology (ICT) challenges in the Bank when the Enterprise Resource Planning (ERP) platform was undergoing upgrades.

It noted that preserving the foreign reserves of the country had implications for the economy, particularly, as manufacturing inputs, power, food and petroleum products were largely sourced from imports. In that regard, the report noted the limits of monetary policy and emphasised the need for reforms in order to reduce pressure on policy. On the under performance of monetary aggregates, it was agreed that the monetary programme be reviewed, though the reason for the under performance was attributed to the nonperformance of fiscal operations. The report observed that much of the domestic revenue was devoted to recurrent expenditure which left very little room for capital projects.

'Members also recognised that while government borrowing would heighten money market rates, AMCON bonds expected to be issued to the banks would moderate the rates. It noted that the CBN should be observant of the development of asset bubbles in the stock market.

The report identified the following pressure points as the continued under-performance of monetary aggregates, relative to long - term trends; inflation threat resulting from anticipated liquidity injections; and rising interbank interest rates as well as high but narrowing interest rate spreads. The challenges for monetary and credit policy in the near term were identified as: providing adequate incentives for banks to lend to the real sector; sustaining exchange rate stability in the face of declining external reserves; and moderating inflationary threats.