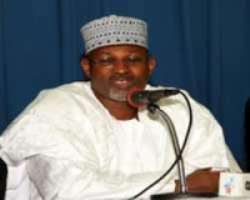 'INEC studying ruling'
THE Independent National Electoral Commission (INEC) has received a copy of the judgment delivered by a Federal High Court, Abuja, which ruled that the commission retained the right to hold elections in the order it deemed fit and ostensibly reversed the order of the April polls.

Chief Press Secretary to the INEC Chairman, Kayode Idowu, told The Guardian yesterday that the commission was studying the verdict and would react to it 'today or tomorrow.'

The court nullified the National Assembly's amendment of the 2010 Electoral Act, which puts the presidential election before the governorship polls.

Delivering judgment in a suit filed by the Labour Party (LP), Justice Ibrahim Auta declared the amended Section 25 of the Act as 'illegal, unconstitutional, null and void.'

According to Auta, the National Assembly has no power to infringe upon the right of INEC to fix dates for elections.

Meanwhile, reactions have continued to trail the ruling.

Chairman, House Committee on Rules and Business, Ita Enang, advised INEC to adopt the sequence of election in the 2010 Electoral Act as its own for the April polls 'to avoid the confusion that would be created in attempting to re-order the elections.'

Enang said: 'It is the duty of the National Assembly to make laws.   The Judiciary has the responsibility to interpret those laws.  The solution to the seeming problem so created by that judgment is that the Independent National Electoral Commission (INEC) can simply adopt the sequence of election already provided in the Electoral Act as its own.'

'What this means is that although the Court had nullified that portion of the Electoral Act that spelt out how election should be held sequentially and given the power to plan the sequence of election to INEC, the electoral body can now come up with its own.

'In doing that, INEC can still say that the sequence of election as contained in the electoral Act is now what it preferred and this will stay because that will represent the decision of INEC as far as sequence of elections is concerned and in line with court judgment too.'

In his reaction, National Publicity Secretary of the ruling Peoples Democratic Party (PDP), Prof. Rufai Ahmed Alkali, said: 'We are yet to get any copy of the court ruling on the order of elections but be that as it may, PDP as a party believes in the law of the land. We are not bothered about which election comes first. Any time the Independent National Electoral Commission is ready for any election, we are ready.

The presidential candidate of the African Democratic Congress (ADC), Prof. Peter Nwangwu, said 'there is merit in the nullification of the timetable. However, with the election so close, I don't think we should insist on disrupting the timetable or if INEC can give us a new timetable just to respect what the Labour Party (LP) is asking for. It appears that the basis was a deliberate effort to favour a particular group which would benefit from any bandwagon effect.'

But Presidential Candidate of the National Conscience Party (NCP), Dele Momodu, attributed the verdict to the work of  'anti-democratic forces.'

According to him, 'everyone is confused as to what is going on with INEC. It seems that there are some anti-democratic forces playing a game and the rumour is that they don't want the election to hold.

'But as it is, we are still studying it. We are talking to our Chairman, Mr. Femi Falana, who you know is a very prominent lawyer, to help us decode what is going on because as things are now, we have lost track of events. We don't know what is going to happen and I think there is a lot of confusion.'

'The implication of the National Assembly's amendment to the 2010 Electoral Act in the first instance is that it would create a bandwagon effect but with the present court order, things will become normal,' Musa said.

Governorship candidate of the Action Congress of Nigeria (ACN) in Delta State, Ovie Omo-Agege said: 'I support the position of the court. It is good for our democracy and for INEC's independence. INEC should not bother to appeal the judgment.'

PDP spokesman in Lagos, Dr. Olusegun Ogundimu, said: The National Assembly should allow INEC to do its job. They should be allowed to carry out their constitutional responsibility of giving us a credible election.'

Chairman ACN, Lagos, Dele Ajomale, said: 'It is a good judgment. It is unfortunate that PDP deliberately tampered with the traditional order of election in the past simply for their selfish interest. Imagine what would happen if the presidential election comes first? What we expected from INEC this time is sincerity. INEC should, without delay re-arrange the order of election based on the new rulings.'

Ajomale also charged other political parties to keep on mounting pressure on INEC to tinker with the election sequence in line with the new court ruling.

And, former Jigawa State Deputy Governor who is also the All Nigeria Peoples Party (ANPP) gubernatorial candidate in the state, Ibrahim Hassan Hadejia, has expressed his support for the verdict.

Hadejia said: 'It is very clear that the National Assembly's decision on the election timetable is the manifestation of the ruling People Democratic Party interest. Being an independent electoral commission, why should the lawmakers set the date for the conduct of all elections? This is an indication that the commission is not independent if some one will determine it activities.'