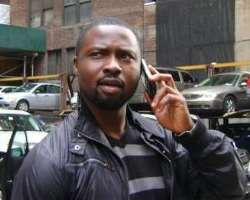 Movie Producer , Daniel Ademilokan has dragged This Day Newspapers to court over a story he considered injurious to his personality and career. Ademilokan who is married to popular actress and model, Doris Simeon his asking for a retraction and ten million Naira as compesation for the damages the said report allegedly did to his 'reputation'

Inside sources however told gistmaster.com that Ademilokan's threat to sue was all a face saving ploy. According to what gistmaster.com gathered, This Day said that he had problems with some people over the production of the work. He was said to have collected money but did not fufil part of his own bargain. According to a media executive that spoke with Adeniyi, the only mistake ws that the reporter did npt quote the right production name but the issue is that Ademilokan has issues with Shola Fajobi, the executive producer of Super Mom, Next Movie Star. He also said to have some unfinished business with Tajuddeen Adepetu, the managing Director of Soundcity.

When Adeniyi contacted Ademilokan. he disclosed that his lawyers are already handling the matter.