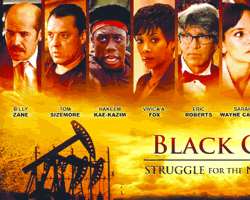 Five years after establishing himself as a director of note with award-winning movie, Amazing Grace, Jeta Amata is set to record another blockbuster with his yet to be released movie, Black Gold.

Black Gold is an epic film about environmental justice and the fight over the control of the scarce oil resources the world thrives on. In Black Gold, the line between good and evil is blurred as corrupt government officials, greedy oil companies and violent rebels go on warpath over oil spills and degradation of the land caused by oil exploration.

The powerful story of greed, murder and corruption within Nigeria's war-torn Niger Delta captures the turbulence coursing through local communities in the country's oil-rich region. Like Amazing Grace, the visual details of Black Gold are so acute as almost to carry a smell, from the oil polluted creeks and mucky habitats to the stench of corruption pervasive of local authorities.

This landscape, beautifully rendered by Jeta Amata, is drenched in an artistic consciousness of punishment and reward, survival and death. Yet, in the end, Black Gold is less than the sum of its parts. It meanders along, convinced of its own idiosyncratic suavity, never venturing out of its maker's comfort zones.

Filmed on location in Nigeria and Hollywood, America, the movie is packed with lively characters and a plethora of Nigerian dynamics. Black Gold deftly blends a winning story with heaps of action while neatly avoiding a predictable climax characteristic of most locally made flicks.