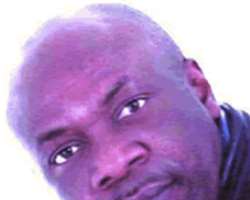 •Okah
Even in jail, purported leader of the Movement for the Emancipation of the Niger Delta (MEND), Henry Okah, remains unrepentant and unfazed. From his South African prison cell, he spoke at the weekend and called for the 'flushing out' of the political class in Nigeria through the kind of mass revolt and popular resistance sweeping across North Africa and parts of the Middle East.

Okah telephoned Sunday Sun twice, first on Friday morning and again on Saturday morning, and spoke on his travail in a conversation that cumulatively lasted about 15 minutes. In a voice dripping with confidence, Okah insisted that the situation in Nigeria was not different from what was happening in the Arab countries that had experienced uprising since the beginning of the year.

'Let me tell you that a revolution can happen in Nigeria. What you see happening in Tunisia, Egypt, Libya, Bahrain or Yemen will one day occur in Nigeria except the present crop of political leaders are flushed out. There is grinding poverty in the country and corruption continues to be endemic. So what else do you want? These were some of the harsh realities that led to the revolts in those countries.

'I hear they say there cannot be uprising in Nigeria. They are just deceiving themselves,' he said.

Asked how he was able to make a phone call when it was reported that security around him had been tightened following the discovery of eight cells phones, alongside a map of the court he was being tried in and other documents in his cell during a raid by the South African police.

Okah laughed. 'Those are just lies and I'm really disappointed in the South African media, which has been feeding its Nigerian counterpart with misinformation about my situation in prison.'

Pointedly dismissing the reports, he speaks further. 'Let me tell you that there is no big deal about cell phones in South Africa prisons. If my telephone was seized and other cell phones, where did I get another one to call you?

'In the prison here, you have access to phone. It is a pay phone and you are allowed to use it. That is what I use to call you. You can also speak to your lawyer with it but you cannot receive calls.'

'I didn't abuse Jonathan'
Sunday Sun further enquired if it was true, as reported in the media, that he was threatening President Goodluck Jonathan and cabinet ministers in his administration.

His response was swift. 'That is another lie. I have access to them but I have never called any one of them.

'The fact is I do not believe Jonathan can make any difference in Nigeria and my views are well known. But that is not enough for the media to report falsehood that I threatened or abused him and the ministers. That is not true. Why should I? If they have evidence, let them prove it.'

Vows to fight on
The militant leader insisted on his innocence and vowed to fight on, even to the highest level in the judiciary. According to him, the matter had been politicised because the South African government, he claimed, was merely acting out the script from the Nigerian government.

'My pledge to the Nigerian and South African government is that I will fight till the end and to the highest level. If they think my incarceration or death will stop the Niger Delta struggle, they are joking,' Okah said.

Reminded that it was absurd for him to be fighting a government led by Jonathan, who is supposed to be his brother, Okah retorted: 'Does it matter? I don't believe he has anything to offer.'

Pressed further to proffer an alternative to Jonathan from among the presidential candidates of the other political parties, he paused before speaking again.

'I think you are right. I cannot find any alternative to Jonathan from even among the frontrunners in the presidential contest. They are all the same. No difference.'

Moved to maximum prison solitary punishment cell
Okah's case, however, took a new twist on Friday evening as he was transferred from the A-Medium Prison, an awaiting trial facility where he had been detained since October 2, 2010, to the maximum prison in Johannesburg.

The maximum prison is a facility for convicted persons. He is reportedly confined to a solitary punishment cell akin to the type he was detained in Bauchi during his former trial in Nigeria.

On Saturday morning, he confirmed this through another telephone call from the prison.

'I was moved yesterday (Friday) from the A-Medium Prison for awaiting trial suspects to a punishment cell in the maximum prison. Nobody has told me why. After all I have not been convicted. It is a solitary cell without window. It is meant for convicted and hardened criminals. I'm the only awaiting trial suspect that has been so treated. But I will challenge this,' Okah vowed.

Following fears that Okah was allegedly planning a fresh attack in the Niger Delta, the South African police on Tuesday raided his prison cell and reportedly seized cell phones, chargers, a map and papers with phone numbers.

Okah is facing trial on terrorism charges for allegedly masterminding the Independence Day twin car bombings in Abuja that killed 12 people on October 1, 2010.

The Pretoria News reported on Wednesday that the Tuesday evening raid came after the Nigerian government alerted the South African government that Okah had allegedly been calling officials in Nigeria from his prison cell and making threats about new attacks being planned by MEND.

South African prosecutors say Okah, a Maritime Engineer, is leader of the group, an allegation he has denied.