It’s criminal to engage in film business without licence — NFVCB 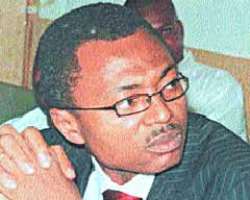 THE Nigerian Films and Video Censors Board says it is an offense to engage in any form of films or video business without obtaining necessary documentation from it. According to the Director General of the Censors Board, Mr. Emeka Mba, the “Act setting up the National Film and Video Censors Board makes it a criminal offence to distribute, exhibit, warehouse or engage in transactions on films and video works without a license from the Board”. He noted that “over the past 26 months the Board has engaged all levels of stakeholders in fashioning out the framework for licensing of distributors and exhibitors, and last month that process was completed and perfected. It becomes unlawful therefore for anyone to purport to do business of distribution or exhibition if the person is not a holder of a license from the Board.

“Yes, indeed, the Board, in a joint exercise with the security agencies and the judiciary has empaneled Task Forces to identify and apprehend all those doing business illegally in film and video works across the country. In the process, arrests were made during the weekend in Onitsha, Anambra state, Lagos, Lagos State and Aba in Abia State respectively. The suspects will be charged accordingly before the law and they will have the fair opportunity to defend themselves. “Like I have mentioned, the Board is working with all relevant agencies of the law enforcement and crime deterrent agencies to stamp out dubious and shadowy characters who are suspected to have illegally flooded the Nigerian markets with pirated foreign movies,” Mr. Mba said in Lagos.

“It is our belief,” he noted, “that those who have so far been arrested are prime suspects in the criminal practices I have identified above. These no doubt, are clear economic crimes that costs Nigeria about $1 Billion annually in revenues from the film sector only. No government will fold its hands and watch such grave pillage of national resource unchallenged”.

So it needs no restating that the principal mandate of the Board is to ensure compliance to the provisions of the laws setting it up.

You could see from the list of licensees as published in some national dailies and the Board's website that the compliance level is almost total. I am clear in my mind that Nigerians are generally law abiding people who are respectful of transparent processes. But unfortunately, the nuisance of the criminally minded few tends to drown the genuine contributions of the patriotic majority. That is what is happening here. From the North, South, West and East the compliance level has ranged from commendable to total.

Try finding out what the criticism is, and try investigating the authenticity of whatever it is you call criticism by examining the opinions of those who have complied. If people are involved in criminality as is the case here and do not want to be subjected to transparency test and processes they will do anything possible and impossible to befuddle the issues. Criminals in the creative industries in Nigeria must be exposed and smoked out, that is the simple mandate that I see myself pursuing.

The Board believes the questions arising from our enforcement activities should be as follows:

1. Why have the marketers in Onitsha refused to comply with the regulations, whilst over 2,000 plus distributors have so far complied with the requirements. In fact the Board bent so far backwards to even offer provinsional licenses to all those who simply obtained the form, and registered, without even completing all the processes. The Board took this action to show faith with the perculiar circumstances of the industry. This more than anything is a firm commitment of the Board's believe that everyone who requires a license is given one, as long as the meet the MINIMUM requirement. No one at the Board excluded the marketers, furthermore, the forms are still on for sale.

2. Regarding the cost of compliance: the Board has reduces the applicable fees and charges from 250,000 a year to a special rate of 40,000 per year for the coalition of marketers, whilst the 25,000 registration fee was equally waived. questions should also be.

4. It is also important to note the significance of the licensing regime which is to ensure strict adherence to the Board's censorship decisions. in the recent times we have seen a huge difference in the movies censored and the movies actually released in the market. in fact we have seen movies that were actually refused classification are being distributed in the market. a classic example is the movie “ Presidential Ambition” which the Board withheld classification, and which is currently in the market. other examples include the movie Executive Decision! You may recall that even members of the National Assembly have consistently excoriated the Board about the levity in enforcing its mandate.

At the moment, several movies are being released without the necessary approvals.
5. The issues are quite simple to avoid the embarrassment of possible arrest and prosecution, all persons involved in the business of film video marketing, distribution, and exhibition must register and obtain license to do so, as the Board remains absolutely resolute in the enforcement of its decisions across the country.

In fact it may be even be that the amount the marketers are willing to pay as legal fees may actually pay for the registration of a majority of all their members!!.
6. The Board also frowns at the attempts to blackmail and intimidation being employed by the shadowy association of film video producers marketers (FVPMAN).

Several text messages and calls have been made to the DG, and other key staff, as well as other marketers who have already registered with the Board, such as OJ productions, Ulzee Productions, Remdel Productions, and Don Pedro Media etc. Already the threat to life case has been reported to the relevant security agencies. for investigation.