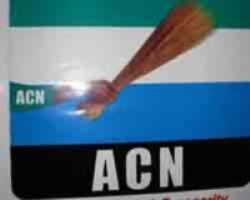 Judiciary not target of petition, says Oni
It's smear campaign against Salami, party alleges
THE political gladiators in Ekiti State are on their familiar terrain again: Accusing and blaming one another on the latest intrigues over the judgment of the Appeal Court Election Petitions Tribunal, which sacked Segun Oni as governor of the state.

Yesterday, the Action Congress of Nigeria (ACN) took on Oni over his petition against the appellate court, which removed him from office over irregularities at the re-run election upon which the Independent National Electoral Commission (INEC) declared him as the winner.

But Oni, who accused the judges of the Appeal Court, Ilorin Division of improper conduct in his petition to the NJC, said he had no 'intention to impugn on the integrity and credibility of the judiciary or any legal practitioners, whose names and telephone numbers appeared on the call logs' he submitted to the Supreme Court and the NJC.

He said the numbers and names appeared 'as a matter of necessity and not out of mendacity.'

The state chairman of ACN, Chief Olajide Awe, said Oni lacks the moral justification to complain against the nullification of an election that was conducted without a voters' register, Form EC8A and with its collation done at a police station, which was not designated for that purpose.

Also, ACN National Publicity Secretary of ACN), Alhaji Lai Mohammed, yesterday alleged a grand design by 'a group of persons' to discredit the President of the Appeal Court, Justice Ayo Salami, over the judgments in cases that brought into offices Governor Kayode Fayemi of Ekiti State and his Osun State counterpart, AbdulRauf Aregbesola.

Mohammed, who warning against the development, said if the alleged plot was not shelved, it could affect the nation's democracy and turn the country and its people into a lawless society.

At Igbaja Local Council of Kwara State yesterday, Mohammed faulted 'the recent series of articles against the judge by those these judgments did not favour.'

He spoke with reporters at the presentation of 193 motorcycles and helmets to all the wards in the state by the ACN governorship candidate in the state, Dele Belgore (SAN).

Mohammed said: 'We are worried because President (Goodluck Jonathan) is pretending that he does not know how his party (Peoples Democratic Party) (PDP) has been trying to destroy the judiciary.

'In fact, by the action of the party, it wants to reverse the decisions in the cases of Ekiti and Osun states. If they try it, the country will not remain the same again. Look at the highly revered Justice Ayo Salami and see how some people of recent have tried to discredit him on the pages of newspapers. This will not work because the consequences will be too serious for our democracy.'

In a statement yesterday, Awe (Ekiti ACN chief), decried Oni's attack on Salami, saying the Appeal Court president's offence would seem to be his courage to insist on the truth and the sacked governor's inability to penetrate his court with filthy lucre.

In his petition to NJC, Oni complained against the judgment delivered by Justice Salami in which the votes credited to him in Ido/Osi were deducted by Appeal Tribunal to give the victory to Fayemi.

'If Oni has good advisers, he ought to have been told that the NJC cannot help him out of his cul-de-sac no matter the amount of dirt thrown at the Court of Appeal and no matter the conspiracy being masterminded by the enemies of judicial integrity in our country.

'It was after all not Salami who threw Oni out of the Ekiti Government House on February 17, 2009. That was a panel comprised of an entirely different set of judges, yet it indicted the election that brought him in as fraudulent and non-compliant with the Electoral Act.

'We have no doubt in our mind that the alleged petition to NJC would amount to nothing because we have nothing to fear as we have committed no offence nor do we believe in subverting and manipulating the system the way Oni and his cohorts did,' Awe said.

Awe said had Oni been tried and prosecuted for illegally occupying an office for which he was not elected, he would not have had the effrontery to petition the NJC that the Appeal Court verdict robbed him of key votes in Ido/Osi Local Council.

Instead of complaining about the 2007 and 2009 polls, which the Appeal Court said was marred by massive irregularities, Awe advised Oni to publicly apologise to Ekiti people and seek their forgiveness for being a beneficiary of 'a despicable electoral rape' from which the state is yet to recover.

The ACN boss warned Oni not to push his luck too far and not to misconstrue the silence of Ekiti people for stupidity. According to him, 'Oni should stop insulting the intelligence of Ekiti people by laying claim to victory he never acquired legitimately'.

In a statement by his Chief Media Aide, Wale Ojo-Lanre, Oni said he has respect for the eminent and accomplished legal luminaries whose names and calls appeared in the call logs, which accompanied the petition but 'there was no how I could have removed the names of the legal practitioners from the call logs.

'The petition is not intended to bring down the judiciary or impugn on the character of any member of the Bar but to show the true colour of the ACN as undemocratic agents, whose penchant to use propaganda and invidious legal technicalities to override popular votes have become a threat to democracy.

'We are not out to denigrate the judiciary, legal practitioners or any Nigerian but if democracy must have its root in this country, Nigerians must be made to see the dangers of the desperation and undemocratic tradition of ACN, whose members are known for merely mouthing democracy yet they use undemocratic means for securing electoral victory.

'For the avoidance of doubts, most of these lawyers are personal friends of Chief Segun Oni and he is pained that some of them have their telephone numbers on the call logs used to support his claim on the injustice meted to him and thousands of electorate in Ekiti State by Justice Isa Ayo Salami and his 'trusted' men in the Appeal Court,' he said.

While calling on all Nigerians to support the struggle to sanitise the judiciary and other arms of government that are important to the sustenance of democracy in the country, Oni said 'the task we have embarked upon is not for Segun Oni or Ekiti State alone, it is for the entire country. It is in the interest of all of us in this country, including legal practitioners.'

Meanwhile, the former Chief Judge of Jigawa State, Tijani Abubakar, has described the Salami-Katsina-Alu face-off as a needless embarrassment to the judiciary and the country.

He told The Guardian in Dutse that 'it is unfortunate because there was never a precedence of elevating the President of the Court of Appeal to the Supreme Court but the reverse was the case.

'The first President of the Supreme Court, so also the second, were moved to the Court of Appeal. That was even when the court was much smaller and the powers were not in the quantum contained in the 1999 Constitution where the Court of Appeal is the final court for electoral cases except that of the President.'

He also described the way Salami reacted as not being in conformity with the legal practice, adding that he was at liberty to turn down the promotion in a better way without exposing the judiciary to ridicule. Some lawyers yesterday stormed the premises of Ikeja High Court to protest the continued stay in office of the Chief Justice of Nigeria, Justice Aloysius Katsina-Alu and Salami.

They called for the 'immediate withdrawal of both the CJN and the PCA from their offices', adding that unless the men voluntarily resigned, they would approach the court to force them out of office.

The convener of the forum, Mr. Malachy Ugwumadu, told journalists that the 'historic duties of lawyers in every society is to champion the cause of justice and truth, uphold and observe the rule of law, promote and foster the cause of humanity and protect the integrity, rights and honour of their fellow citizens.'