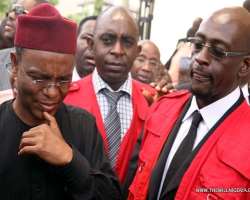 ABUJA, Feb 23, (THEWILL) - The Economic and Financial Crimes Commission, EFCC, on today urged a Federal Capital Territory High Court in Abuja to ignore all the trial-evading antics of a former Minister of the Federal Capital Territory, FCT, Mallam Nasir El-Rufai and grant it leave to arraign him and two others on a newly amended eight count charge.

Counsel to the EFCC, Mr. Adebayo Adelodun (SAN) submitted that El-Rufai and the other accused persons are newly brought before the court on the basis of eight amended charges and urged the court to allow their immediate arraignment.

Adelodun vehemently opposed the plank upon which the defence counsel based their objection to the arraignment saying that the objection was doomed since it was based on an un-reported decision of a Court of Appeal. He also said that, since the judgment was appealed against and was set aside, it ceased to be good law upon which any objection can be validly premised.

Messrs Akin Olujinmi (SAN) and Kanu Agabi (SAN), both counsel to the accused persons had opposed the arraignment on the ground that the charge in which the accused persons were brought to court was done under a law that was null and void and therefore lacked merit.

They specifically said that the ICPC Act, 2003, under which the accused persons

were charged, had been repealed and could therefore not be used as a legal platform for their trial. In response, Adelodun stated that, “as a matter of law and fact, the objection on this ground has become mute, spent and academic by reason that the prosecution had filed an amended charge.” He also said that the offences the accused persons were charged for are known to written laws therefore it is not correct to say they were charged under a non- existing law.

Adelodun further said that the prosecution reserved the right to amend its charge at any stage of the process and that Section 208 of the Criminal Prosecution Code (CPC) empowers the court to allow any such amendment. Besides, he contended that filing of the amended charge means that any defect on the previous one was no longer consequential.

On the ground that EFCC does not have the power to prosecute the accused persons under the ICPC Act and that the offences over which they were charged do not constitute financial crimes, the EFCC counsel said that Section 46 of the EFCC Act is wide and elastic enough to cover the offences they were accused to have committed. Adelodun said that the summary of the charge was “the usage of office and position to gratify, confer undue advantage on self, relation and one another. My lord, if this does not qualify as a form of corrupt practice within the framework of Section 46, I wonder what does. So, I urge the court to accept the amended charge and order the accused to take their plea.”

The judge, after listening to all the parties, reserved ruling on the applications till 28 March 2011.

One of the charges states: “That you, Mallam Nasir Ahmed El-Rufai (M) between 13th day of December, 2003 and 14th of December, 2007 or thereabout at the Ministry of Federal Capital Territory, Abuja in the course of and or in the performance of your official duties as the Minister of the federal Capital Territory did use your said Office and position to gratify and confer corrupt or unfair advantage on your relation to wit your wife Hadiza Ahmed El-Rufai by reallocating to her parts of the parcel of land known as plot No 1201, Asokoro District (A4) Abuja, originally allocated in the Federal Capital Territory Master plan to power Holding company of Nigeria Plc for the construction of transmitting/ injection sub-stations which fully and /or intentionally revoked for that purpose, thereby committing an offence contrary to and punishable under section 19 of the corrupt and Other related Offences act, 2000.