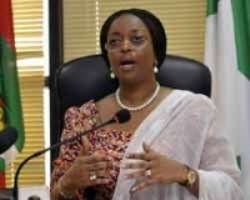 GOOD times await the oil-producing communities as the Federal Government is working out a package that may give a yearly N90 billion dividends to them. The succour for the communities will however wait for the passage of the Petroleum Industry Bill (PIB).

The incentive is part of the new efforts to stem any form of militancy in the Niger Delta area. Yesterday, the government said the money would come in the form of 10 per cent equity participation and one per cent of the total asset value in the oil-producing communities and other directly impacted areas respectively is established in the PIB to protect oil and gas facilities located in the region.

In her presentation at the on-going Nigeria Oil and Gas Conference 2011 (NOG11) in Abuja, the Minister of Petroleum Resources, Deziani Allison-Madueke, stated that the government remained committed to ensuring lasting peace in the Niger Delta and that the dividends would be in the form of direct payments to the host communities.

Also at the event, Senior Special Adviser to the President on Energy, Dr. Emmanuel Egbogah said: 'Direct payments of dividends to oil producing communities will be established to address the Niger Delta crisis. Over $600 million (N90 billion) is estimated as yearly dividend payments to the communities hosting oil and gas facilities or directly impacted by the operation.'

Allison-Madueke, who also spoke on behalf of Egbogah, added that the lull in violence in the Niger Delta had led to an increase in crude oil reserves from the current level of 37.2 billion barrels to 40 billion barrels.

She assures Nigeria's foreign oil partners that the PIB is designed to transform the country's oil sector, tackle regulatory and operational challenges and provide 'robust transparency framework' in line with global practices.

The minister said Nigeria was not unmindful of the delay the passage of the bill had on investment decisions, but said the law would soon be passed.

Egbogah, had also in a separate session declared that the 10 per cent equity participation as well as the one per cent total asset value dividends would be administered based on a trust mechanism to ensure that the benefits were equitably conveyed to the impacted communities.

He said the expected yearly dividend payment is different from the 10 per cent derivation fund that currently accrues to oil producing states.

According to him, the total compensation sum is a summation of the value of the assets and expected revenue from the industry when the PIB becomes a law.

He urged participants to interact and proffer solution on ways to better develop the sector. In line with its aspiration to increase oil and gas reserves to establish a sustainable fiscal framework, the Federal Government has restated its commitment to grow and maintain reserves to 40 billion barrels through the period to 2020.

The minister said to entrench transparency and accountability in the energy sector, critical institutional reforms were ongoing while emphasis was being placed on the rapid delivery of domestic gas infrastructure, which are crucial to the nation's quest for full utilisation of its huge gas potential.

She said it was imperative for the administration to bring to fruition, the industry reforms that have been identified as necessary for the efficient and sustainable development of resources for the benefits of the nation and other stakeholders.