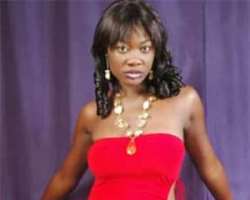 From Ini Edo to Rukky Sanda, many actresses have been linked with sensational R and B crooner, D'banj. Lately rumour mongers have included sultry actress, Mercy Johnson, on the list.

Life and Beat confronted Johnson with the speculation and she exclaimed, “Jesus! I have never set my eyes on the guy. I listen to his music and even like it. But I tell you, I have never seen him one on one.”

Johnson said she could not fathom the origin of the rumour. “I don't know Rukky Sanda. I am not trying to 'make mouth'. I am nobody. It is just by the grace of God that I am where I am today. I have not seen her, let alone knowing whether she has anything to do with the musician or not.”

The screen diva admitted she was saddened by the rumour. “They have said many things about me, but this is one of the things they have said about me that has made me very sad. I am not happy. If it is about something I did, I don't bother or react. I only caution myself and learn lessons from it. But when they come out of the blues to write and say negative things about me, it really bothers me.”

Johnson alleged that some people were determined to frustrate her. “That is all I can say to that. They just want to frustrate my life. I don't know what to do again. I really don't know.”