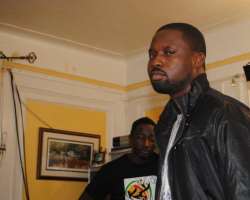 Talented director Dan Ademinokan, might not be talented in acting alone because of the way different allegations of financial scams keep piling up against him. First it was Taju Adepetu who claimed that after Dan collected money from him he didn't do his job but bolted away then came Sola Fajobi, producer of 'Supermom' who is fuming and threatening fire and brimstone as he alleged that Dan collected 1.6m to produce some episodes of the season 1 one of the programme but after recording 9 episodes, Dan took permission to go to America for 4 days only for him to return in january and Sola had to go and get Wale Adebayo to finish the reality show and it was discovered that the production team were not paid including equipment rentals.

Just as the dust was settling down on this,on fri 18th around 11am an American based journalist Bukky Fadun posted this on her facebook page:

“Doris Simon Ademinokan. All i ever done for u and your husband was to help your husband here in America. He got two peoples's money trough me, $10,000 and $1,000 from my friends, and all attempt to get the money back was not working. This people are on my case because they knew your husband through me. And Doris you had the guts to open your mouth and curse me, then deny that your husband never got any money from my friends”

Instantly we called Dan who denied such and claimed that he even just spoke to the person who was said to have given him the money as it was the imagination of people.

We spoke to Bukky Edun who said that Dan was lying and infact she sent this facebook message.

The girl got every proof of their transactions and business records.She gave out a number and said “If you are ready to publish this story out, then call her but if you are ready to be Daniel's friend,I am not sure what to tell u. I just finished speaking to my friend Kunle Afolayan he knew about this matter. Call the girl she will send you the copy of the contract agreement,and every other thing you need.”

Thankfully,a few minutes later Olamide Davis who paid Dan a sum of money called B.O.N and said Dan is a liar as he had collected 11,000 dollars from her through his manager,Mabel, in America and for months he has reneged on his agreement to either do the movie or return the money. She promised to send us documents of the transcations but few minutes later Bukky sent us this facebook message: “If no positive answer comes out of him regarding the money on monday she's gonna send you the whole document. Someone promised to work on it this weekend and begged not to send any document to anybody right now till Monday. Intrestingly,Dan called back few minutes later asking B.O.N to properly investigate our story well as he neither collected money from anyone or was he owing anyone and threatened to take legal Actions against anyone who writes any story against him or subjects him to ridicule.

It will be noted that Dan collected 100,000 to edit 'dancehood' from DIM but he didn't edit the movie but after a whole year of chasing him around he returned 40,000 and since then he has not returned the 60,000,the 40,000 was sent through Jonath Wilson ,now we look forward to how Daniel will resolve his issues with Sola Fajobi and Olamide Davis in the next few days. Trust us to give you update as it unfolds.