ANGELS II... in search of a feminine cultural ambassador 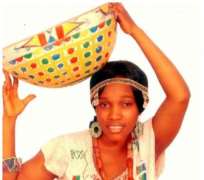 ONE of the many ways Nigerians, especially the female folks, have engraved the country's name on gold is in beauty pageantry both on the continental and international scenes. A thunderous ovation announced Oluchi Onwuagba as the Face of Africa and a million stars shone on Agbani Darego when she was crowned Miss World but the drums are waiting to beat again for the lucky girl that would emerge as a true ambassador of culture and tradition in the second season of the originally African and proudly Nigerian reality TV show ANGELS.

Poised to compete fiercely in the fight for the traditional crown in this very interesting show that would be filled with drama, intrigues, thrills and a traditional show-casing of the African woman's heritage are 20 metropolitan damsels selected from various bubbling cities of the six geo-political zones in the country and that is just a tip of the iceberg.
The young city girls would be taken to a remote part of the country to live for 30 days under strict traditional and cultural conditions where they would bath in the stream, wear local attires and make-up, cook with earthen pots on firewood as well as go to farms; there certainly would not be any sophisticated cell phone to chat with loved ones, burgers or the normal cosmetics and city life they are used to.

Last year when the show was introduced by OGB Audiovisual Ltd, there was enormous applause for the content as it gave the female gender a chance to show to Nigerians how much knowledge city girls have of their culture and places of origin.

According to Ofeka Donatus, producer of the show, ANGELS evolved by the quest to find out the true Africanness amongst the young ladies who have been so westernized that they aliens to some of the core values of their origin, culture and tradition.

“We found out that there was a problem in the society in such a way that our young people have sold out to foreign ideals and western culture. We decided that it could be crazy to create a reality TV show that would take city girls to live as village girls for some time.”

The first edition saw 12 girls taken from Lagos State to a timid village in Abia State and at the end, Angel Monique came out tops and won a cash prize of N5m that has taken her to South Africa to further her education.
In the second season which will be aired on 19 stations across the country, 20 girls chosen from 26 states will be heading for an undisclosed village in Imo State to live 30 days of their lives on ANGEL's Ground under ancestral presence and traditional environment.

The selection which was conducted in Port Harcourt with seasoned actor, Sam Dede and Emmanuel Ogar both of the Department of Theatre Arts at the University of Port-Harcourt, witnessed 276 hopeful ladies determined to show their understanding of traditional rites and customs. Though only 20 made it after the screening, the many girls that participated in the screening had their eyes fixed on this season's grand prize: N5 million cash and a brand new car. That alone would make a New Yorker ready to come down the country side.
Unlike the last edition where tasks consisted mainly of the South-East Igbo culture, ANGELS II has expanded in scope and content.

Paschal Obi, the assistant producer of the show made it known that this time the show will truly be cultural in all ramifications.

“We have included tasks that will cut across the different tribes and cultures in Nigeria; the chosen Angels will be made to do things they may not have heard about before. You may see a Yoruba Angel that has been used to Amala and Ewedu being tasked to prepare Tuwo and another from the Fulani tribe being tasked to prepare Edi ka kong soup,” he informed.

Another aspect that have been worked on is the costumes the participants will be adored in, unlike the previous edition were the girls were allowed to put on their normal city wears, they would henceforth be clothed in traditional outfits throughout the duration of the show or eviction as the case maybe, that means the girls will come out in native styled hairstyles, wrappers and beads to bring out the beauty of the African woman.

Instead of the Ancestors making the decision of who is to be evicted, the deciders are now the viewers who the producers of the show say should have the final say.

“From the last edition, we found out that the viewers had so much passion for some particular Angels to the other and that did not go down with the Ancestors so we consulted the oracle and they decided to give ancestral guidance and leave the people to decide which Angel has to go through their SMS votes.

Already, the Imo State government under the governance of Chief Ikedi Ohakim will be hosting the ANGELS team as they come to witness firsthand his Clean and Green initiative that have transformed the state.

The organizers of the show are optimistic that the show will bring the state to spotlight once the ANGELS move in.
Some of the selected girls confirmed of their readily to live the village life while those yet to come to terms with some of the techniques in cooking some local delicacies are getting last minute lectures from their mothers or close relatives.

So Nigerians especially ladies should look forward to seeing Angel Blessing Nnenna from Ebonyi State who dislikes dishonesty and loves Pounded Yam and Egusi soup try to outwit Angel Emelda Bassey from Calabar over who can cook better for the Ancestors acceptance. Angel Diala from Imo State will sure have more home support than Angel Janeth Kummiap, the 24 year-old English Literature major from Plateau State. Coming all the way from Kogi State Angel Lucy who believes in realism will soon come to the reality of the prize in contention when she encounters a more determined Angel Nemji Jumbo from Bonny Islands, Rivers State.

Only time will tell who will become the next cultural ambassador that will be entitled to N5m, a brand new car and become the first coordinator of the ANGELS Foundation that will be commissioned to raise the awareness on cultural and traditional issues in Nigeria and Africa.